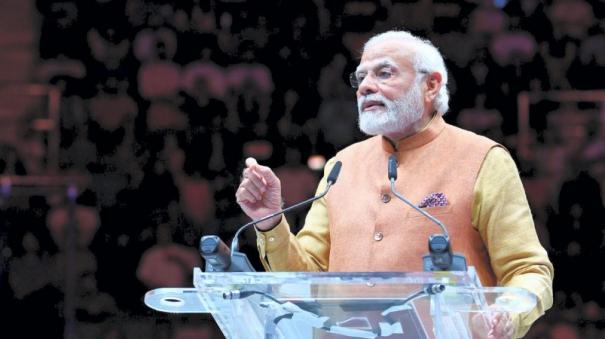 New Delhi: The conspiracy to cripple democracy during the Emergency was foiled. Prime Minister Narendra Modi has said that we should not forget the dark period of that emergency.

On the last Sunday of every month, Prime Minister Narendra Modi addresses the nation on All India Radio through a program called ‘Manatin Kural’ (Mann Ki Baat). Accordingly, Prime Minister Modi yesterday spoke at this month’s (90th) ‘Voice of the Mind’ program. The state of emergency was declared on June 25, 1975. Then all the rights of the people of the country, including individual liberty, were taken away. An attempt was made to suppress democracy.

But that did not shatter the confidence Indians had in democracy. The people of the country fought democratically, overcame the emergency and restored democracy. Nowhere in the world has such an incident been democratically defeated by the dictatorial course of the rulers.

I had the opportunity to see the event during the emergency. I have also taken part in the struggle against it. Now that the country is celebrating its 75th Independence Day, we must not forget the dark times of emergency. Future generations should not forget this.

Start-ups: Start-up companies were not involved in the aerospace industry before 2019. The situation has changed in the last 3 years. Now the youth of our country are interested in this field. For example, 2 start-ups Agnikul and Skyroot have been launched in Chennai and Hyderabad. These companies are developing rocket launchers to carry light weight satellites. This will significantly reduce the cost of paying for satellites.

Waste Recycling: Plastic litter continues to rise on the Pondicherry beach. The people of Pondicherry have launched an awareness campaign emphasizing the need to protect the sea, the beach and the environment. Thousands of kilos of waste are collected daily at Karaikal and composted. Others are recycled.

The famous Puri Jegannathar Rata Yatra is scheduled to start from July 1. The people of Odisha are getting ready to go to Puri to see this. Similarly, the Bandarpur Yatra in Maharashtra and the Amarnath Yatra in Kashmir are about to begin.

We must continue to adhere to corona prevention precautions, including wearing a mask, adhering to social spaces, and washing your hands frequently. This is something to be proud of. Booster vaccination is also available for those who have been given 2 doses. Those who qualify should be vaccinated with a booster vaccine. The disease is likely to spread as the rainy season begins. Therefore, we must be vigilant and vigilant.