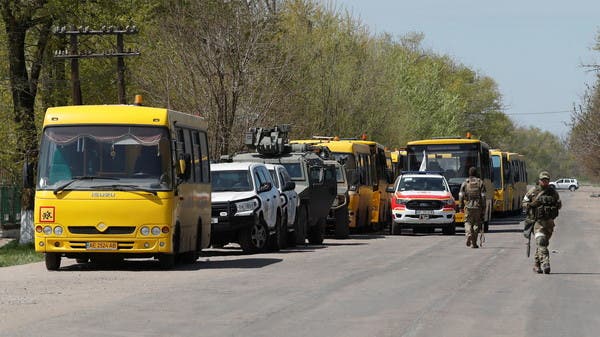 After nearly two months of siege, the evacuation of civilians holed up at the Azovstal steel plant in the Ukrainian city of Mariupol began over the weekend, and people sheltering elsewhere in the city were allowed out on Monday, local officials said.

A video posted online by Ukrainian forces on Sunday showed elderly women and mothers with young children climbing over a steep mound of rubble from the sprawling Azovstal steel plant, and eventually boarding a bus.

Evacuation of civilians from Azovstal

Ukrainian President Volodymyr Zelensky said on Sunday that more than 100 civilians are expected to arrive in the Ukrainian-controlled city of Zaporozhye on Monday.

“Today, for the first time in all the days of the war, this absolutely necessary (humanitarian) corridor has started to function,” Zelensky said in a pre-recorded speech posted on his Telegram channel.

There were concerns about the safety of the evacuees. Those who have fled Russian-occupied areas in the past have reported shooting at their cars, and Ukrainian officials have repeatedly accused Russian forces of bombing agreed evacuation routes.

A Ukrainian defender of the Azovstal steel plant urged organizations such as the United Nations and the Red Cross to ensure the safety of evacuees. Svyatoslav Balamar, deputy commander of the Azov Regiment, told The Associated Press in an interview that there should be guarantees from “a third party – politicians and world leaders – to negotiate with the Russians to get us out of here.”

Another defender of the factory said that Russian forces resumed bombing on Sunday, once the evacuation of a group of civilians was completed.

Denis Shlyga, commander of the 12th operational brigade of the Ukrainian National Guard, said in a television interview on Sunday night that several hundred civilians were still trapped, along with nearly 500 wounded soldiers and “many” bodies. “Dozens of young children are still in hiding under the lab,” Schleiga said.

There may still be as many as 100,000 people in Mariupol, including an estimated 2,000 Ukrainian fighters under the sprawling Soviet-era steel mill – the only part of the city not occupied by the Russians.