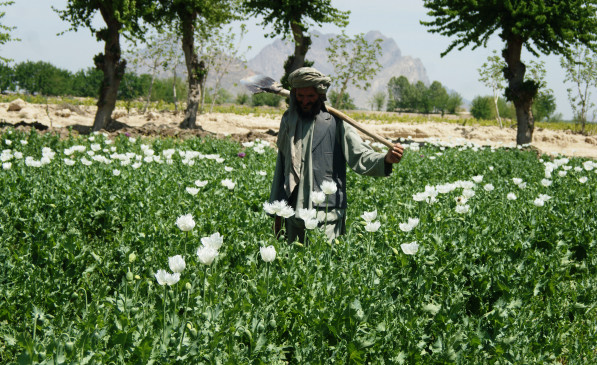 Digital Desk, Kabul. Afghanistan’s Taliban-led government has made a significant claim to make the country drug-free by imposing a complete ban on the drug trade. Afghanistan remains the world’s largest illegal supplier of opium, however, due to a humanitarian crisis in the country caused by the halt of foreign aid, widespread unemployment, rising prices, starvation and drought.

On the streets of Kabul it can be seen that locals are forced to put up their household items for sale for a living, while small temporary setups sell heroin at exorbitant prices. The main reason for the increase in the illegal trade and sale of drugs in Afghanistan The reason is the widespread destruction during the war, which has displaced millions of people from their homes. The cuts in foreign aid have exacerbated the economic and humanitarian crisis, leaving most Afghans with no choice but to embrace the drug trade to survive.

This dependence is destined to bring more instability to Afghanistan and even more challenges for the Taliban-led government, as many armed groups, ethnic warlords and even public officials have been using illegal drugs for their own gain and power. business is used. It would not be wrong to say that opium production has been a potential boon for the Taliban.

The Taliban has relied on the Afghan opium trade as one of their main sources of income, said Cesar Goods, head of the Kabul office of the UN Office of Drugs and Crimes (UNODC). With higher production, drugs are available at a cheaper and more attractive price and hence have a wider reach. These are the best moments, Goodes said, in which these illegal groups position themselves to expand their businesses.

Interestingly, the US and other countries have also chosen to ignore the threats posed by Afghanistan’s illicit drug trade, as they have rarely mentioned it. More than 80 percent is coming from Afghanistan. The US has spent more than $8 billion over the past 15 years in its effort to tighten its grip on the Taliban, from profiteering through the opium and heroin trade through targeted airstrikes on suspected laboratories.

However, the strategy failed miserably, as Afghanistan remains the world’s largest opium supplier, which is unlikely to stop. Currently, Afghan farmers are growing and sowing opium in their fields, while the price of wheat, which is rain-dependent, is shrinking due to drought. An Afghan farmer, who also sells heroin locally, described how opium is grown and heroin is extracted from it. He said, we grow opium plants, then extract opium gum from it. Then opium gum is refined into morphine and heroin. In relation to the thriving drug trade industry in Afghanistan, it is estimated that it is a turnover of about $ 6.6 billion per year. The produce is then smuggled and exported to many countries including Africa, Europe, Canada, Russia, the Middle East and other parts of Asia.