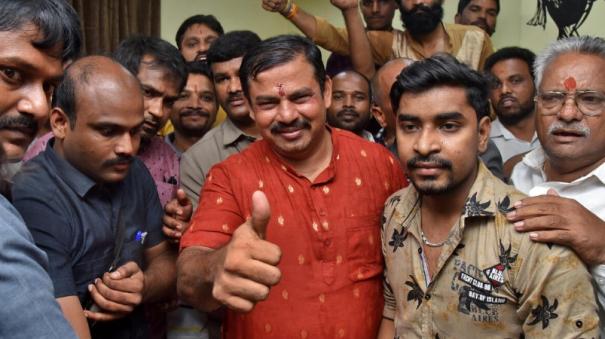 Hyderabad: Telangana BJP MLA arrested for controversial speech Rajasingh was suspended by the BJP yesterday. He was produced in court and lodged in Sanjal Guda Jail.

Rajasingh (45), BJP MLA from Goshamahal constituency, Hyderabad. He was arrested by the Hyderabad police early yesterday morning for slandering the Prophet.

Earlier, Munawar Farooqui, a comedy stage speaker, had denigrated Rama and Sita during a show. Due to this, MLA Raja Singh had warned that if Munawar Farooqi speaks derogatorily of Hindu Gods next time, I will insult the Prophet.

In this case, last Friday, Munawar Farooqui participated in a program in Hyderabad and once again made fun of Hindu gods. Due to this, BJP MLA Erajasingh, who was enraged, talked about the Prophet and posted it on social media. It went viral in Hyderabad.

Due to this, hundreds of MLAs, Hyderabad Municipal Councilors and party executives from the MIM party protested in front of all police stations including the police commissioner’s office in Hyderabad. They raised slogans demanding immediate arrest of the BJP MLA.

Following this, there was a tense situation in Hyderabad. People panicked fearing religious riots. Following this yesterday morning BJP MLA Raja Singh was arrested by the Hyderabad police and produced in the court. Raja Singhanchal was lodged in Guda jail after the magistrate ordered him to be remanded in judicial custody for 14 days. Prior to this, there were scuffles and arguments outside the court between the supporters of Raja Singh and the opposing parties. Police brought the situation under control.

In this case, yesterday evening, the BJP top brass announced the suspension of BJP MLA Rajasingh from the party for speaking against the principles of the party in a way that harmed the religious goodwill.

Moreover, the BJP supremo has also ordered MLA Erajasingh to give an explanation in this regard within 10 days. However, he was released on bail within hours.