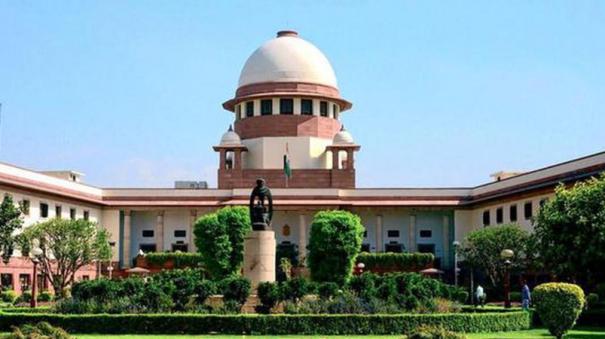 New Delhi: Since conversion is an important issue across the country, the Supreme Court has said that it should not be given a political colour. The court has directed the chief advocate of the central government to inform the court about forced conversion and measures to be taken to control it if conversion takes place by providing concessions and assistance.

Advocate Ashwini Kumar Upadhyay filed a petition in the Supreme Court seeking an order to the Central and State Governments to take strict action to control the illegal conversions taking place in the country.

Conversion incidents are happening every week across the country. Conversion takes place in many ways, such as intimidation, threats, gifts and favors, deception through magic spells and superstitions. There is a problem of forced conversion across the country, not a single district being spared. The damage caused to the people is huge. This should be controlled immediately,’ he said in the petition.

This petition came up for hearing yesterday in the session of Supreme Court Judges M.R. Shah and C.D. Ravikumar. The argument then took place:

Solicitor General Tushar Mehta appearing for the Central Government: Forced conversion can harm national welfare. The government considers this a serious issue. The Supreme Court has already said that the purpose of trusts should not be conversion. Forced conversion is unconstitutional.

Judges: There is a difference between the right to freedom of religion and the right to convert. The court needs the assistance of Attorney General Venkataramani in this case. He should inform the court about the forced conversion and the measures to be taken to control it if the conversion takes place by giving concessions and assistance.

Senior Advocate Wilson appearing for the Government of Tamil Nadu: This is a petition with a political motive. There are no such conversions in Tamil Nadu. A decision on the matter should be left to the Legislature. The petitioner has political connections. There are also sedition charges against him. Thus the argument took place.

Following this, the judges said:

You may have many reasons for this objection. Better if such conversion does not happen in your state. If that happens, it’s a bad situation. Don’t look at this issue with just one state in mind. We are concerned about the country as a whole. Don’t change the court process. Do not bring politics into it and paint it with political color.

This is what the judges said.

The next hearing in this case is scheduled to take place on February 7. Since illegal conversion is the main issue, the judges have ordered that the petitioner’s lawyer Arvind Thattar must appear in person.

‘Forced conversion can be a threat to national security. The Supreme Court had recently said that it may affect the religious freedom of the people.

The Supreme Court had told the central government that ‘genuine efforts and measures should be taken to deal with this very serious problem’. The Supreme Court has already warned that if conversion through deception, incitement and intimidation is not stopped, a very complicated situation will develop.

During an earlier hearing in the Supreme Court in the conversion case, the Gujarat government said, ‘Religious freedom does not include the right to convert. Therefore, it is noteworthy that the ban imposed by the High Court on the state government’s law requiring prior permission of the District Collector for religious conversion through marriage should be removed.