Cooperation Agreement between the UAE and Morocco in Karate 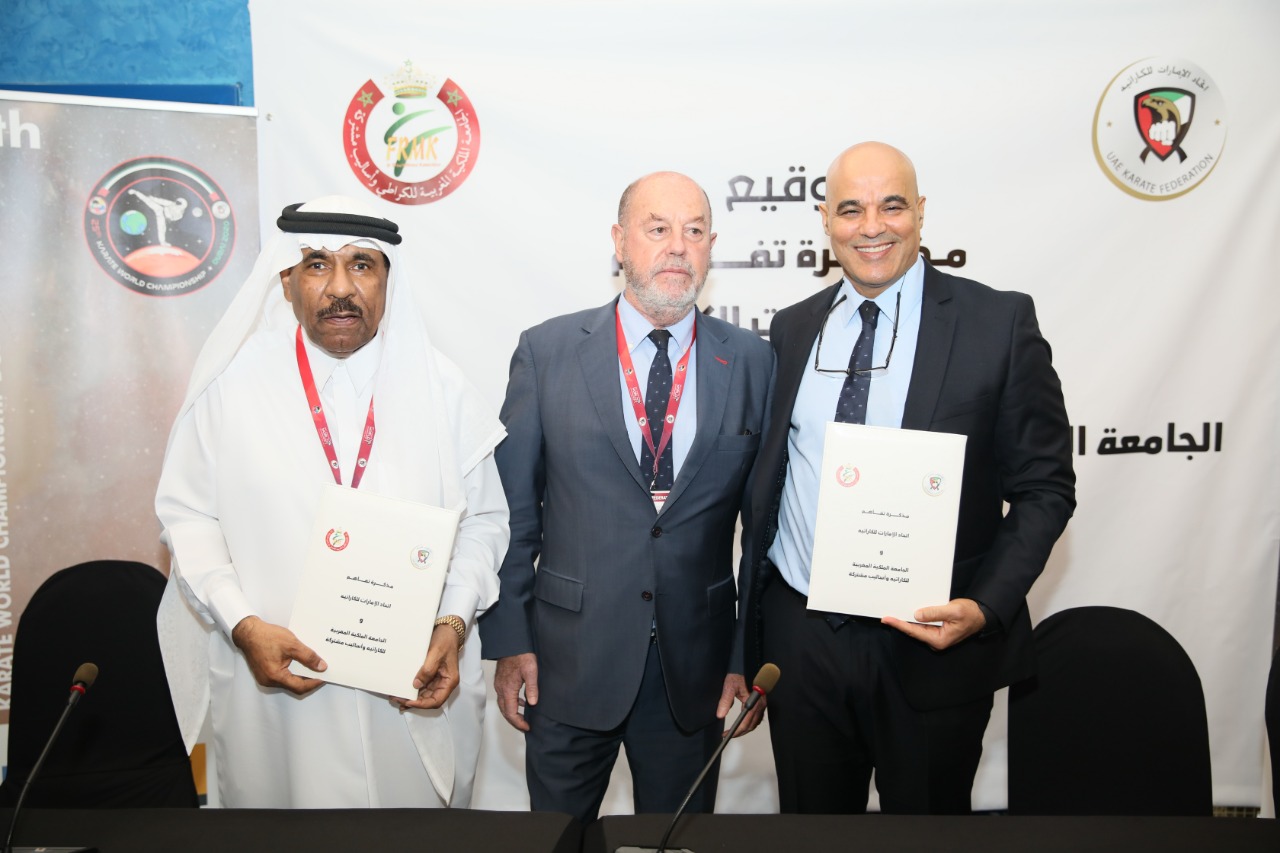 The Emirates Karate Federation signed a cooperation agreement with its Moroccan counterpart, in the presence of the President of the International Karate Federation of Spain, Antonio Spinos, on the sidelines of Dubai’s hosting of the 25th World Karate Championship, which is closing today at the Hamdan bin Mohammed Sports Complex, and has competed for its titles since November 16, 1000 players from 117 countries.
The agreement was signed by Major General Nasser Abdul Razzaq Al-Razuqi, President of the UAE and Asian Federations, First Vice-President of the International Federation, and on behalf of the Moroccan side, Mohamed Muqtabel, President of the Royal Moroccan Karate University. The signing ceremony was also witnessed by the member of the Executive Office of the International Federation, President of the Arab Federation, Dr. Ibrahim The sniper, and a number of heads of the federations of the countries participating in the World Cup.
The President of the UAE and Asian Federations, and First Vice-President of the International Karate Federation, Major General Nasser Abdul Razzaq Al-Razouki, stressed the importance of the agreement, which allows cooperation with his Moroccan counterpart, exchanging experiences and training camps, and participating in tournaments organized by both parties, and its reflection on the development of the game and providing opportunities for friction for teams and teams. nationalities of both countries.
Al-Razouki said in a press statement, “The agreement includes the administrative and technical sides, and strengthens the bonds of cooperation,” noting that this honorable initiative confirms the keenness on Arab work as a single team in raising the level of Arab players.
The head of the Moroccan Karate Association, Mohamed Moqtab, expressed his happiness with the agreement, and said, “The results of the agreement will be positively reflected on the joint camps, and the exchange of visits between teams and teams, especially since the sport of karate has great international weight, as it is practiced by more than 100 million players around the world.” It should take its natural place in the Olympic Games.”