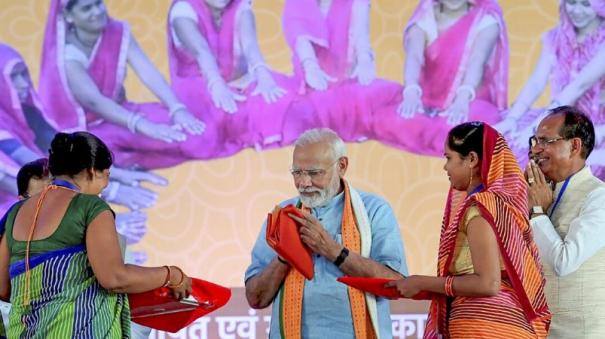 Bhopal: Prime Minister Narendra Modi participated in Self Help Group Conference held yesterday at Karahal, Sheopur, Madhya Pradesh. At that time the self help group provided various welfare programs to the women. Speaking at the conference, he said:

In the new India, starting from the panchayat to the President’s House, the flag of women’s power is flying. 17,000 women were elected in the recent local elections in Madhya Pradesh. This is a sign of a big change.

Over 8 crore sisters have joined self help groups across the country. Central government has raised the livelihood of about 2 crore women. The central government is taking steps to create new opportunities for women entrepreneurs in the rural economy. As part of this, SHGs have sold goods worth around Rs.500 crore in the markets. The benefits of Prime Minister’s Vandan Yojana and Prime Minister’s Kaushal Vikas Yojana also reach women directly.

The BJP government took office in the middle of 2014. Since then, the central government has been continuously working to uplift the dignity of women and solve the challenges they face on a daily basis.

More than 11 crore toilets have been constructed across the country under the Swachh India programme. More than 9 crore households have been provided free cooking gas connection. Water pipeline project is being intensified. This makes life easier for women.

Rs 11,000 crore has been disbursed to the bank accounts of pregnant mothers under the Mathru Vandana Yojana scheme. Under this scheme Rs.1,300 crore has been provided to Madhya Pradesh alone.

Today is my birthday. Due to government duties, I could not meet the mother who gave birth to me on this day and receive her blessings. However, the tribal mothers gathered here bless me. I am blessed by lakhs of tribal mothers. My mother will be happy to see this. Prime Minister Narendra Modi spoke thus.