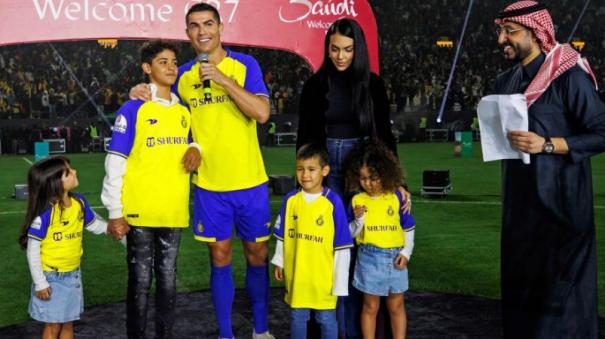 Instead of joining European teams as a professional footballer, Ronaldo joined a club team in a Middle Eastern country that surprised many. In order to overcome that surprise, Ronaldo has revealed the reason for joining Al Nasser Club. Speaking about this, Ronaldo, who recently joined Al Nasser Club, said, “I am a unique player. I consider it good to be here. I have broken all the records in Europe. I want to break some more records here.

Apart from that, I am here to win, enjoy the game and be part of the success of the Saudi culture. I got many offers to join European teams. People came from Brazil, Australia, America and even Portugal. Many clubs tried to sign me, but I made a promise to join this club. It’s not just about football, it’s about the opportunity to be a part of this amazing country.”

Cristiano Ronaldo last played for Manchester United in England. He left the club due to a conflict with the team management and coach. Although Ronaldo participated in the World Cup football series for the 5th time, he could not win the trophy for the team. This time he was a substitute in the pre-quarter-final round and the quarter-final match. He was very dissatisfied with this. He had the same situation in Manchester.

Ronaldo, who has long dominated European league competitions, has now joined an Asian club for the first time. Ronaldo played for Manchester United from 2003 to 2009, Real Madrid from 2009 to 2018 and Juventus from 2018 to 2021. After this, he returned to Manchester United in 2021. But due to dissatisfaction there, he left and is currently signed for Al Nasr.

Ronaldo has long been one of the highest paid players in the world of football. Ronaldo has been linked with Chelsea, Bayern Munich and Napoli following his clash with Manchester. Thus, it was expected that he might join any of these teams. But he has now joined Saudi Arabia’s Al Nasser Club for a huge fee.