Dakar Rally.. A stage separates the coronation of Al-Attiyah in cars and Sunderland on bikes 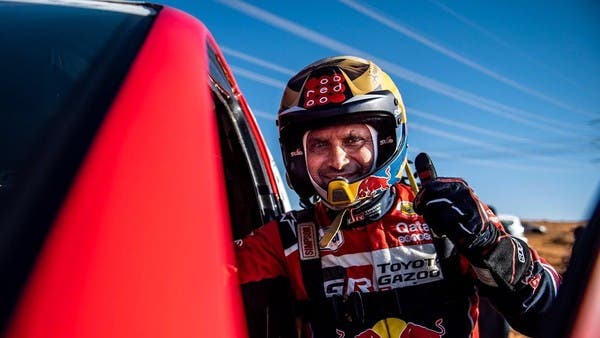 Qatar’s Nasser Al-Attiyah and Britain’s Sam Sunderland came close to winning the Dakar Desert Rally in the car and bike categories, respectively, after topping the general classification on Thursday, a day before the arrival line in Jeddah.

Al-Attiyah (Toyota) has a wide difference of 33:19 minutes from the French Sebastien Loeb (Prodrive) from the Bahrain Red Extreme team, before the Friday stage between Bisha and Jeddah, which is 164 km long, which is the shortest.

And if neither Al-Attiyah nor Sunderland suffer mechanical problems, they are expected to win the famous rally title.

Loeb, the summer of 2017, finished eighth in stage 11 in Bisha, which is 364 km long, after receiving a 5-minute penalty for excessive speed, recording almost the same time as Al-Attiyah, while Spaniard Carlos Sainz won the stage title aboard a hybrid Audi.

Al-Attiyah, the 2011 champion on Volkswagen, 2015 on Mini and 2019 with his current team, said that he will drive cautiously on Friday, as he commented: To lose only four minutes against Sebastian, this is nothing, did you know that?

“We are on the right track,” continued the bronze medalist in shooting at the 2012 London Olympics. Tomorrow is a shorter stage.

He added: We must follow the same approach. It’s important to win the rally, it’s not easy to dominate the Dakar, but I think we have a lot of experience.

In cycling, Sunderland looks close to winning a second title after 2017, when he became the first Briton to win any class of rally.

The Dubai-based 32-year-old KTM rider is about seven minutes ahead of his closest rival, Chilean Papo Quintania, after he finished runner-up on Thursday behind Argentine Kevin Benavides, the 2021 champion.

Sunderland said: “I’m doing well and looking forward to tomorrow.” The rally won’t end until you pass the arrival line at the last stage. As you know, the navigation is difficult in this rally, and the times were close every day.