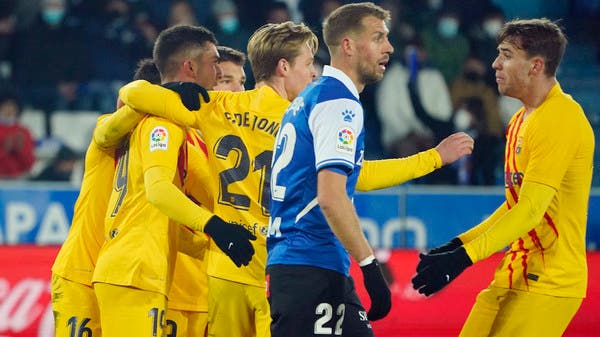 Barcelona defeated its host Deportivo Alaves 1-0 during the match that brought them together on Sunday in the twenty-second round of the Spanish Football League.

Barcelona owes this victory to Frenicie de Jong, who scored the only goal of the match in the 87th minute.

Barcelona raised its score to 35 points in fifth place, achieving its ninth victory in the league this season, compared to losing in four games and drawing in eight.

While Alaves’ balance stopped at 17 points in the penultimate nineteenth place, receiving its 13th defeat this season, in return for winning four games and drawing in five.

The start of the match came at a mediocre level, and Barcelona quickly imposed control over the course of the meeting and continued its attempts in search of scoring the goal of progress, in contrast, Alaves retreated to its midfield and relied on counter-attacks.

However, there was no danger to the two goals in the first quarter of this half, with the exception of some shots from outside the penalty areas, but all of these shots were far from the goal, as the play was limited to the midfield.

In the next quarter of an hour, Alaves gave up a little defensive caution and tried to exchange Barcelona attacks, but they also failed to pose any danger to each other’s goal, as play was also limited to the midfield.

And the situation continued as it was in the last quarter of an hour of this half and the two teams continued attempts to penetrate the defense, but they failed to pose any danger to the other’s goal, except for one chance that was for Alaves in the last minute of the first half when Luis Rioja passed the ball to Berry Pons on the border of the area The penalty was taken to enter the penalty area and then hit the ball, but it easily reached goalkeeper Marc-Andre ter Stegen, Barcelona goalkeeper. Immediately after that, the referee blew the whistle at the end of the first half, with a goalless tie between the two teams.

With the beginning of the second half, Barcelona intensified its offensive attempts in search of a goal, forcing Alaves to retreat to its midfield and rely on counter-attacks.

Barcelona almost scored the goal in the 64th minute when a free kick was played from the right side into the Alaves penalty area, which was met by Luke de Jong with a shot that was blocked by goalkeeper Pacheco and bounced back to Gerard Pique, who tried to play it the moment he fell with his head, but failed to be distracted by the defense.

After that attack, Alaves abandoned his defensive caution and exchanged attacks for Barcelona, ​​​​but they failed to pose any danger to the other’s goal to limit the play to the midfield.

Play remained confined to the center of the field until the 77th minute, which almost witnessed Alaves scoring the goal of the lead when Jason Remissero passed a cross from the right side that Jose Luis Samartin Mano rose to and met it with a header, but it passed next to the left post of goalkeeper Ter Stegen.

In the 87th minute, Barcelona scored the goal when Jordi Alba played inside the penalty area to Ferran Torres, who passed it directly to Frenkie de Jong, who easily put it into the goal.

The remaining time of the second half passed without anything new, before the referee blew the whistle at the end of the match, with Barcelona winning with a clean goal.