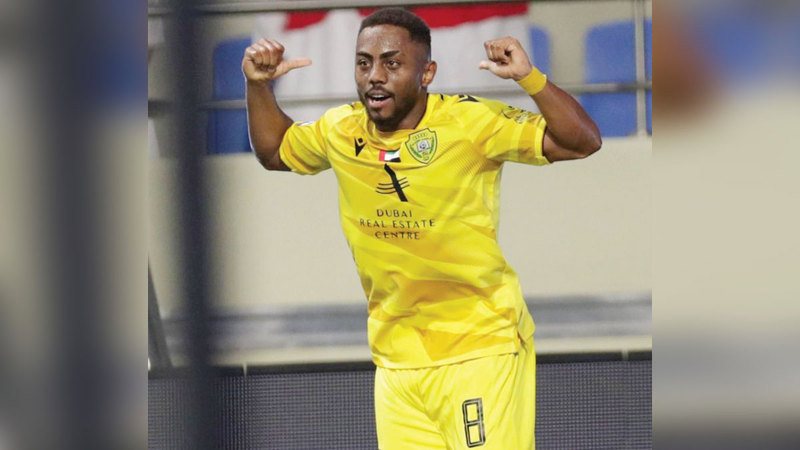 Brazilian striker Gabriel de Souza scored the third goal for Al Wasl against Khorfakkan, ending the player who joined the “Emperor” from Rio Ave, Portugal, a long period of fasting from scoring, which amounted to 113 days.

This is the second time that the 26-year-old player has scored goals with the “Panthers”, after he scored two goals against Al-Nasr in the fourth round of the ADNOC Professional League, when Al-Wasl won 2-1 at Al Maktoum Stadium.

Although de Souza participated in 12 matches out of a total of 13 rounds in the first leg of the league, with an average of 543 minutes, he missed scoring in 10 matches.

The Argentine player, Thomas Shanclay, is the “password” in De Souza’s brilliance, as the irony is that Shanclay made the three goals scored by the Brazilian player with Al Wasl.

Gabriel de Souza started seven matches, was substituted six times, while completing one match until its end, in contrast, he participated as a substitute in five matches.

The Brazilian player has weak numbers in the first half of the season, after he scored three goals and played a decisive pass, and although he plays in the attack, he hit only six balls in 12 matches, and the positive thing is that he hit three times towards the goal with a success rate of 100%, after it resulted in The three times he scored goals, and the three goals came from inside the penalty area.

For his part, Argentine coach Juan Antonio Pizzi expressed his happiness at Al Wasl’s victory over Khorfakkan by three goals without a response, the day before yesterday, in the 13th round of the league, pointing out that the “Emperor” seeks to continue competing for the top positions.

He said in a press conference after the match: “We will continue to fight for the first positions after the team’s score rose to 25 points, with our great victory over Khor Fakkan.”

Al Wasl coach added, “I am happy with the great victory, as well as with keeping our nets clean, and we will evaluate the situation in the transfer market after the departure of our striker Gilberto Oliveira.”

He continued, “I do not look at the current absences from Al Wasl, as much as focusing on providing good performance with the current group, and achieving positive results that serve our goal.”