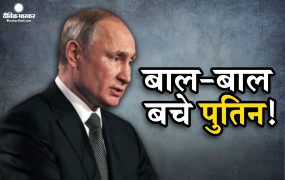 Digital Desk, Moscow. The war between Russia and Ukraine continues. Meanwhile, a big news is coming that there has been a deadly attack on Russian President Vladimir Putin. Although Putin is completely safe. Euro Weekly News has made a big disclosure about the attack on Putin. It is being told that an attempt has been made to attack them by blocking the way of their convoy.

Security agencies have started investigation regarding this whole matter. Many people have also been arrested. At the same time, many employees engaged in the security of the President have been suspended. According to the information, this type of attack on Putin has not happened for the first time. In the year 2017, he himself had informed how his life was saved in the deadly attack 5 times.

According to Euroweekly news, President Putin was walking away from his residence when something suddenly hit the wheel of his left car. At the same time, a car engaged in his protection was stopped by an ambulance. Suddenly after this obstacle, the car engaged in the second security went astray. The Russian media has not clarified anything about this whole matter because it is closely monitored by the media. According to Euroweekly, Putin travels in a decoy motorcade because of the increasing likelihood of attacks on him. There has been a stir around the world after the news of the attack on Putin.

It is reported, quoting sources, that there is a very serious case of lapse in Putin’s security. Many security personnel engaged in Putin’s security have also been arrested due to negligence in this matter. It is also being told that the security guards who spied on Putin’s travels. He has been removed from security with immediate effect.

The GVR Telegram channel claimed that Putin was on his way to his residence at the time of the incident, accompanied by a hoax security squad, in view of the security threat. There were 5 armed cars in his convoy, in which Putin was present in the third car. However, no damage was reported to Putin and the security forces in the attack.

Will meet PM Modi in SCO

The attack on President Vladimir Putin comes as he is on his way to Samarkand to attend the SCO meeting. There he will also meet the Prime Minister of India, Narendra Modi. The eyes of the world are on the meeting of PM Modi and President Putin. The interesting thing is that Washington is also keeping a close eye on this meeting.