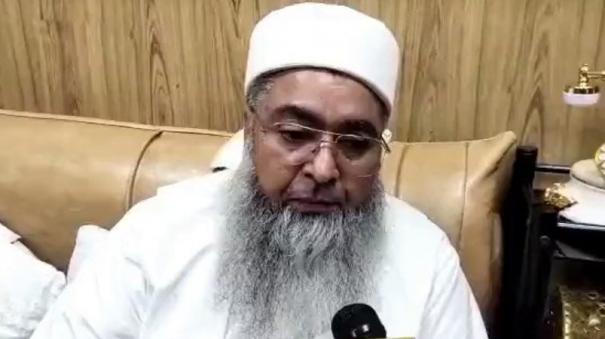 Those who lead the Muslim prayers in mosques are called Imams. Dr. Umar Ahmed Ilyazi, who is the head of their national level organization, lives in his office premises. The office of the All India Imams Organization is located in Delhi’s Kasturibai Gandhi Marg along with the mosque. RSS leader Mohan Bhagwat came here on September 22 with his fellow executives. Umar Ahmed Ilyazi who was there welcomed them and spoke for about an hour.

After this meeting, RSS leader Bhagwat also visited the nearby madrasa and spoke to the students there. Thus, Imam Ilyazi praised Mohan Bhagwat as the father of the nation and the Rishi of the nation. After that, Imam Ilyazi complained to the Delhi Police that he started getting death threats from that evening. A case has been registered in Delhi’s Tilak Marg Police Station on this complaint.

In his complaint, Umar Ahmed Ilyazi said, “Since the day I met RSS chief Mohan Bhagwat, many people have been threatening me to cut off my head. The first threat came from a WhatsApp number from Kolkata. Similarly, threats are coming from Pakistan, Singapore, Indonesia and London. “Some are threatening through their home and office phones,” he said.

The Tilak Marg police, who are investigating the complaint, have come to know that there is a foreign conspiracy behind the death threats. The case is expected to be transferred to Delhi’s Special Police Wing soon. Meanwhile, the house of Umar Ilyasi, the leader of the imams, has been secured by police. It is also recommended to strengthen this protection.