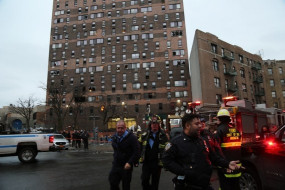 Digital Desk, New York. The death toll in a high-rise building fire in the Bronx borough of New York City is 17. Earlier this number was said to be 19. Mayor Eric Adams gave the information.

In a press briefing on Monday, Adams said nine adults and eight children were killed in the fire, Xinhua news agency reported. New York City Fire Commissioner Daniel Nigro said there had been some error in the count and that it was a little good news that the death toll was 17, not 19. Negro said that many people are swinging between life and death in hospitals and the death toll may rise again.

Negro said that while we are certain the fire was caused by a faulty portable electric heater, the investigation by the Fire Marshal is still ongoing. According to the mayor’s office, New York City’s flag will be flown until sunset on Wednesday in honor of the victims of the tragic fire.