Death toll rises to 8 after residential building collapses in Jordan 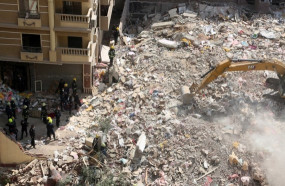 Digital Desk, Amman. The Public Security Department (PSD) said in a statement that the death toll in a residential building collapsed in the Jordanian capital, Amman, has risen to eight. The building collapsed on Tuesday. PSD said that the rescue work is still going on.

A 50-year-old man and a child were pulled from the rubble and admitted to a hospital, officials said. The news agency Petra said that so far 16 people have been injured in this accident.

Brigadier General Hatem Jaber, the director of civil defense, told Xinhua on Wednesday that rescue teams were still trying their best to rescue those trapped under the rubble, Xinhua news agency reported.

On Wednesday, the Amman Prosecutor General ordered the detention of three people in connection with the building collapse. These three include the person responsible for maintaining the property, a maintenance supervisor and a maintenance technician.