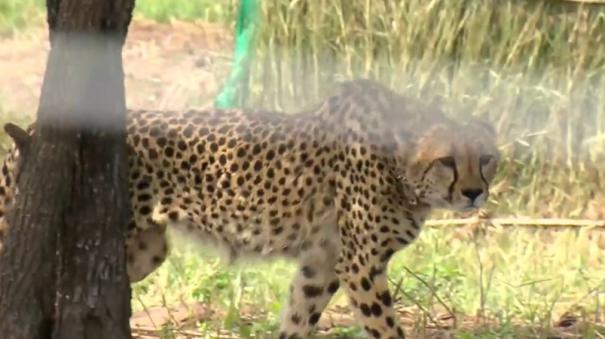 Bhopal: A Bishnoi community organization has written a letter to Prime Minister Modi asking him to stop the practice of feeding deer to the Chivingi tigers in Kuno National Park.

On Saturday, September 17, Prime Minister Modi’s birthday, Chivingi tigers, which were declared extinct in India in 1952, were reintroduced to Indian forests. For this, 8 Chivingi tigers have been brought in from Namibia as part of a program to ensure the revival and diversity of wildlife and their habitats.

Prime Minister Modi inaugurated them in the Kuno forests of Madhya Pradesh. At that time, he said, “People should wait for some time to see the Chivingi tigers who have come as our guests to Kuno National Park. We should give time for the Chivingi tigers to make Kuno their own home.”

In this situation, a Bishnoi community organization has written to Prime Minister Modi that there are reports of deer being given as food to chives released in Kuno and that it should be stopped. The Akila Bharat Bishnoi Maha Sabha, in a letter to the Prime Minister, said, “Recently, deer are being fed to the Chivingi tigers, which were brought from Namibia and released in the Kuno National Park. This practice should be stopped.

While drastic measures are being taken to protect all species from extinction and threats, this information is heartbreaking. The Indian government has brought back the Chivingi tiger species which has been absent from India for a long time. At the same time, how can it be justified not to focus on endangered species in India,” the letter said.

BJP’s Kuldeep Bishnoi, who has posted on his Twitter, said, “The central government should investigate this matter considering the fact that the deer species in Rajasthan are on the verge of extinction and the sentiments of the Bishnoi people. If this information is found to be true, I request that it be stopped immediately.”

It is noteworthy that the Bishnoi community is generally known to respect all wild animals and the black buck deer.