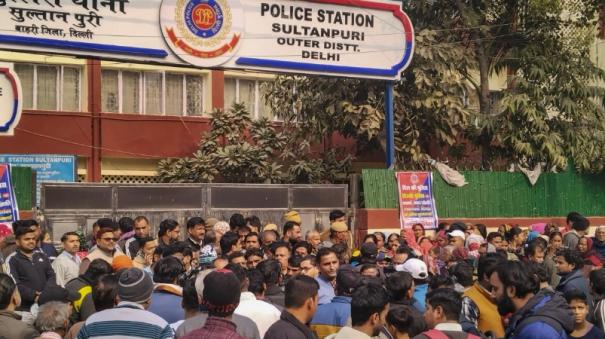 New Delhi: A large number of people gathered in front of the Sultanpuri Police Station and protested demanding that the culprit who killed a young woman by dragging her in a car be severely punished in their area.

A 20-year-old woman in Sultanpuri area of ​​the capital Delhi went out for work on her two-wheeler. He was returning home in the wee hours of Sunday when his two-wheeler collided with a car. But the occupants of that car sped away without stopping the car. The clothes of the woman involved in the accident got stuck in their car. The girl was apparently dragged for a distance of about 7 km. When the police found the body of the young woman, there was no clothing on her body.

In this situation, the locals protested in front of the Sultanpuri Police Station demanding that the culprits involved in the brutality of the young woman in their area should be severely punished.

One of the protestors said, “Everyone wears four or five layers of clothes to deal with the cold in Delhi. How could a woman who went outside be found without clothes?”

A relative of the victim said, “The police called us and told us that our girl has met with an accident. All those responsible for her death should be given death penalty. They all have caused a lot of harm to her family. They must be punished.”

Rekha, the mother of the deceased said, “When I spoke to her at 9pm on Saturday night, I asked her when she would come home. She said she would come home shortly. Then I took my medicine and fell asleep. I don’t know what happened after that. The police did nothing to make the incident look like an accident. He said that they are trying.

Deepak saw the body of a woman being dragged under a car and informed the police. According to him, when they took a U-turn three times within a few kilometers on the Ganjawala road, it was clear that a body was trapped under the car. But the police called me and asked where I saw the body.

Another eyewitness to the incident, Vikas works as a delivery boy at Somoto. He said that while I was leaving after completing a delivery order, a car sped past me at Maharaja Agrasen Chowk. The occupants of the car saw a police barricade in front of them and quickly took a U-turn. Then I saw a woman’s head stuck in the car. Shocked to see that, I informed two policemen who came on a bike about the incident.

Meanwhile, 5 people who were traveling in a Maruti Boleno car have been arrested in connection with this incident. Forensic experts reached the Sultanpuri police station and examined the Maruti Poleno car.