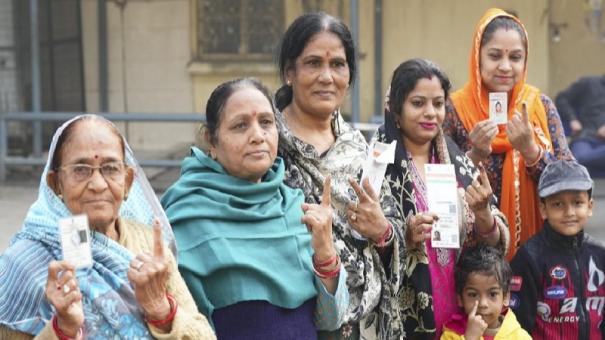 New Delhi: The much-anticipated Delhi Corporation Elections are underway this morning. 18% voter turnout as of 12 noon. This is the first local body election to be held after the merger of the three local bodies of the national capital through the Delhi Municipal Corporation Amendment Act, 2022. In this, the Aam Aadmi Party ran a competitive campaign against the ruling BJP at the center to win. This election is also seen as a preview of the Delhi Assembly elections.

Voting is going on in total 250 Municipal Corporation Ward Member Elections in Delhi. A total of 1,349 candidates, including 709 women, are contesting. Voting started at 8 am today. Tight security arrangements have been made at the polling centres. Liquor shops are closed for three days from today.

Earlier this morning Arvind Kejriwal tweeted, “Today’s election will help keep Delhi clean and beautiful and create a corruption-free system. I request all Delhiites to cast your votes today to elect an honest and effective administration.” Garbage management is a major problem in Delhi Corporation. People are also very unhappy about this. So the promise of waste management is what people love most.

BJP alleges: Meanwhile, the names of 450 voters in Delhi’s Subhash Mohalla ward have been removed from the electoral roll. This is a huge conspiracy. Delhi government has done this. BJP MP said that we will file a complaint in this regard and request the Election Commission to cancel this election and conduct it again. Manoj Tiwari alleged.

Similarly, Delhi Congress president Anil Choudhary tweeted, “I have come to vote at Tallupura polling station. But my name is not in the voter list. My wife’s name is He had said that he had voted.

When former health minister Harsh Vardhan, who voted at the Krishna Nagar polling station, met the press, I had voted. I hope all the people of Delhi will do their duty with enthusiasm. Under the leadership of Prime Minister Modi, BJP has taken the country to new heights. He said people of Delhi have seen the work of BJP for 15 years.