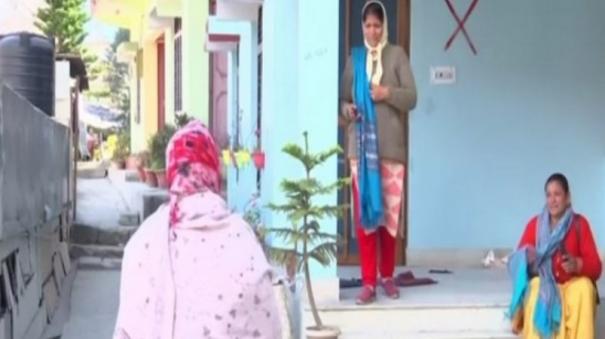 Joshimath: As the government has taken steps to demolish the buildings affected by the earthquake in Joshimath, people are shedding tears thinking about their hard-built houses.

Drowning Joshimath: Joshimath is a town located at the foothills of the Himalayas in Chamoli District, Uttarakhand. The town is home to around 4,500 buildings, including houses, hostels and hotels, which is the gateway to the Badrinath Temple. About 30,000 people live here. At the end of last December, there were huge cracks in various houses and commercial establishments in Joshimath city. 678 buildings have been identified as unsafe buildings.

Tearful People: Locals are in tears as their long-lived home is about to be demolished. “This is my mother’s house. I got married at the age of 19. My mother is now 80 years old. I have a brother. We worked hard to build this house. We have been living here for over 60 years. Officials have said that they are going to demolish this house. They put the corresponding code on the house. Our long-term bond with this house has now come to an end,” said Bindu, who shared his anguish in tears.

Another person from Joshimath said, “I have been living here since I was a child. Now the district administration has insisted to vacate this house. We are a family of 8 people. We have sent some of our family members to relative’s house. “We have no other house except this house,” he said.

What is the background? – Locals blame the landslides on the influx of tourists, climate change and continuous construction work in the mountainous area. Here hills are cut and widened to make highways. CP Rajend Thiran, a Himalayan technicist and geologist at the NIAS Center in Bengaluru, Karnataka, warned that this would destabilize the region’s terrain. Due to excessive construction work, urbanization projects and increasing number of tourists day by day Joshimath city is on the verge of destruction. Read more > Joshimath City Burying into Soil due to Urbanization