Details of the historical document to approve the Saudi National Day 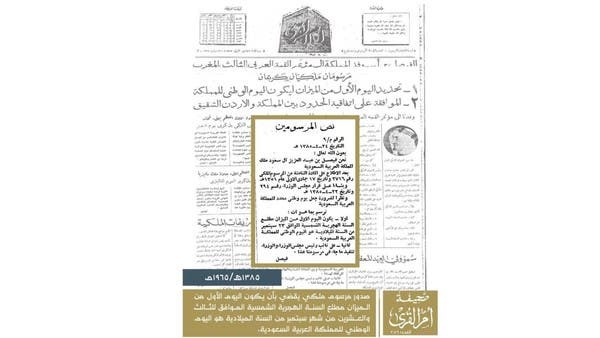 The King Abdul Aziz House published a copy of the text of the historical document of the Official Gazette (Umm Al Qura) in 1385 AH (1965 AD), on the appointment of the National Day of the Kingdom of Saudi Arabia, which was decided to celebrate the unification of the Kingdom on September 23 of each year, and this decision came by a royal decree of King Faisal Bin Abdulaziz Al Saud.

The document included the text of the royal decree issued in that year by King Faisal bin Abdulaziz, which stipulates that the first day of Libra will be the beginning of the solar Hijri year, corresponding to September 23 of the Gregorian year, is the National Day of Saudi Arabia, and this official statement came so that Saudi Arabia has a national day Its children celebrate it and brag about its achievements…and they remember the glories of the heroisms that were made to unite the parts of this country.

The Abu Hajjar Palace in Taif hosted the first Saudi celebrations of the National Day, as it was the place where the founding king announced the launch of the name “Kingdom of Saudi Arabia” after unification.

She is our home

The National Day celebrations aim to enhance the patriotic feeling and entertain families, as they include the largest air and sea show in history, in addition to a group of entertainment parties, as concerts start in Jeddah and Riyadh, in addition to fireworks displays, military shows and a march for the men of the Interior.