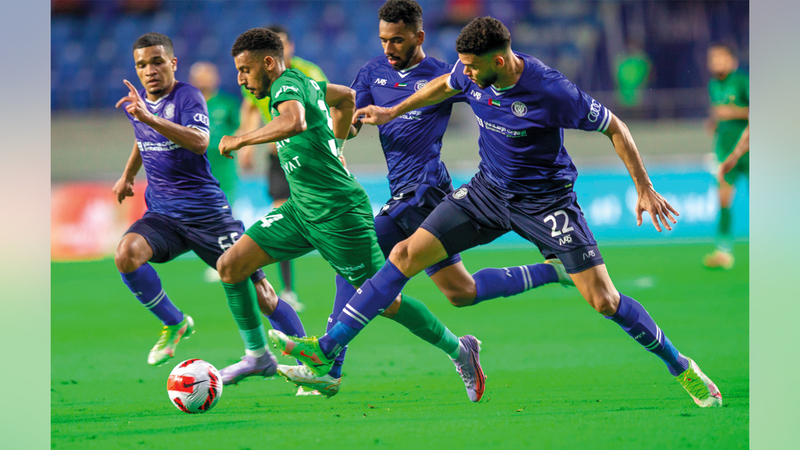 Shabab Al-Ahly neglected a valuable victory, and three important points would have brought it closer to the lead in the ADNOC Professional Football League, after its host Al-Nasr imposed a 1-1 draw on it, just three minutes before the end of the meeting, the day before yesterday, at Al Maktoum Stadium in Al-Maktoum Club. Victory in Dubai, within the tenth round.

Shabab Al-Ahly was ahead with the goal of Iranian substitute Mehdi Qaidi «63» until the 87th minute, when Al-Nassr scored the equalizing goal from a penalty kick successfully executed by Portuguese player Antonio Jose.

Four technical events contributed to changing the course of the match in the interest of victory, including the absence of the explicit striker in the ranks of Al-Ahly youth, who could have taken advantage of the many opportunities that the Knights had, especially in the first half, and Al-Ahly youth missed several opportunities to score, in addition to the interventions made by a coach. Argentinian victory Ramon Diaz was successful, and gave preference to victory, after he pushed both Tariq Ahmed and Omar Jumaa, in addition to the sudden decline of Al-Ahly youth in the last part of the second half, despite scoring the goal of progress, made Al-Nasr the one who took the initiative in the match, He pressed hard on the Al-Ahly youth front, which resulted in a penalty kick, from which he scored the equalizer in the exciting match.

Shabab Al-Ahly and Al-Nasr both raised their score to 17 points.

For his part, Al-Ahly youth coach Mahdi Ali confirmed that his team in general played a good match, but was late at the end of the match, especially after he conceded a goal, noting that they tried in the first half to play in a way that the team compensated for the absence of the explicit striker, and excelled greatly in Chances are created, but they don’t translate into players’ goals.

Mahdi Ali indicated that they are very happy with Omar Abdel Rahman’s return, and said in a press statement: “Physically and healthy, Omar was in a good condition, but all that is missing is to participate in the largest number of matches in order to take the pace and fitness of the matches.”

In turn, Al-Nasr coach Diaz said that they enjoyed a great match between two great teams, noting that “Al-Nasr’s reaction was positive after being late with a goal.”

• The absence of the explicit striker in the ranks of Al-Ahly youth.

• The interventions of the Argentine victory coach, Ramon Diaz, were successful.

• The sudden decline of Al-Ahly youth in the last part of the second half.