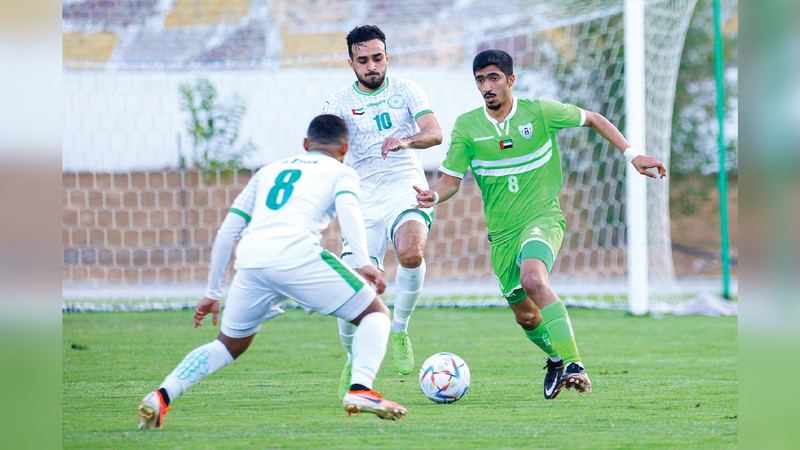 This evening, at 4:55, the 16th week of the first-division league will start with four matches, in which Hatta will play with the Knights of Spain, the Emirates with Al-Rams, Al-Jazira Al-Hamra with Al-Hamriya, and “City” with Al-Orouba, and the confrontations will resume the day after tomorrow, as he discusses Dibba Al-Hisn team leads the competition for the winter title when it meets Masfout, Baynunah plays with Masafi, Fujairah with Al-Dhaid, and Gulf FC with Al-Arabi, while cooperation will enjoy waiting.

Dibba Al-Hisn leads the standings with 33 points, followed by Hatta with 30 points, then Al-Jazirah Al-Hamra (27), Al-Emarat (26), Masfout (22), Al-Hamriya and Al-Arabi (21), Al-Dhaid and Masafi (20), Al-Urouba (19), and “Gulf FC” and Al-Taawun (18), Al-Rams and Fujairah (14), then Baynunah (7) and Knights of Hispania (6) in the last two places. Dibba Al-Hisn’s confrontation with Masfout is considered one of the strongest matches this week, due to the high technical capabilities of the two teams, in addition to the victory that will lead Dibba Al-Hisn to win the title of Winter Champion. On the other hand, Hatta is looking for an important victory through which he continues to seek to snatch one of the two promotion cards in a match in which he needs to focus on high in order to avoid being exposed to surprises, especially since his opponent plays in a lumpy defensive manner. Hatta hopes to maintain his progress in the standings, especially since only three points separate him from leaders Dibba Al-Hisn. The Emirates match with Al-Rams is no less important, especially as it is the “Ras Al-Khaimah Derby”, and the matches of the two teams usually witness a great club, as well as the Al-Jazira Al-Hamra match with Al-Hamriya, which is a valuable opportunity for Al-Hamriya to return strong to the competition, and Al-Jazira Al-Hamra to establish its presence in the foreground, especially as it occupies Currently ranked third.

• 33 points, Dibba Al-Hisn is at the top of the amateur league, three points behind the runner-up Hatta.