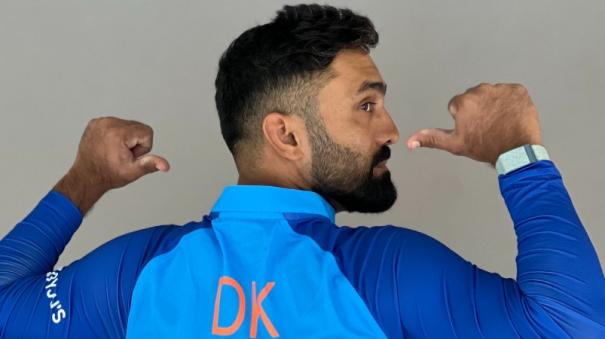 Mohali: Wicket keeper batsman Dinesh Karthik shared a photo of himself wearing the new jersey of the Indian cricket team on his social media page. Fans are very busy liking, commenting and sharing it.

In this case, the new light blue colored jersey of the Indian team was released yesterday. After that, all the Indian players in the series between India and Australia took a picture wearing that jersey. Dinesh Karthik also took a photo wearing the new jersey. That’s what he shared now. It has heaps of likes.

“Do you have a problem with me coming forward? I will wear a coat suit. I will step on my feet, sir. Style. A fan opined that this photo of Dinesh Karthik is reminiscent of the Kabali verse that says Ketha”.