Disaster management in Afghanistan: The death toll from the earthquake is expected to rise to more than 1,500 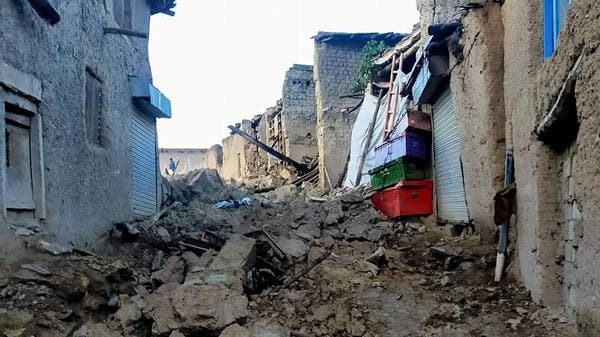 The disaster management in Afghanistan expected that the death toll from the earthquake that struck the country would rise to more than 1,500, while the Taliban said that it was not able to deal with the earthquake incident alone and requested international support.

Afghan media reported that the earthquake destroyed about 2,000 homes in the southeast of the country.

Al-Arabiya correspondent reported that Pakistan is seeking to establish a camp for the displaced from the earthquake-hit areas near the border.

A powerful earthquake struck a mountainous rural area in eastern Afghanistan on Wednesday morning, killing 1,000 people and injuring 1,500 others in one of the deadliest earthquakes in decades, according to the official news agency. The number may rise as many families are missing.

“The death toll has reached 1,000 and this number is rising,” Muhammad Amin Hudhaifa, head of media and culture for Paktika province, said in a statement to the press. “People are digging grave by grave,” he added.

And the “Reuters” news agency, quoting Afghan officials, reported that an earthquake measuring 6.1 on the Richter scale occurred early Wednesday morning, killing at least 950 people and injuring hundreds, and they expected the death toll to rise with the flow of information from remote mountain villages.

The US Geological Survey said a 6.1-magnitude earthquake shook parts of Afghanistan and Pakistan during the early hours of Wednesday morning.

Information about the earthquake is still scarce. The state-run Bakhtar news agency reported that rescuers arrived in the area by helicopter.

Immediately after the earthquake, the Ministry of Interior of Afghanistan reported that the earthquake that hit the east of the country in the early hours of the morning killed more than 280 people, at least, in addition to hundreds of injured. It is an initial outcome, which rose later.

The disaster management agency confirmed that the majority of confirmed deaths were in Paktika province, in addition to Nangarhar and Khost provinces.

Most of the confirmed deaths were in Paktika province, said Mohammad Naseem Haqqani, head of the Afghanistan Disaster Management Authority. He added that deaths were also reported in Nangarhar and Khost provinces, while authorities were investigating more casualties.

The earthquake occurred 44 kilometers from the city of Khost in southeastern Afghanistan, the US Geological Survey, at a depth of 51 kilometers.

The Euro-Mediterranean Seismological Center said in a tweet on “Twitter” that the tremor was felt by 119 million people in Pakistan, Afghanistan and India over a distance of about 500 km.

The quake was felt in the Afghan capital, Kabul, as well as in the Pakistani capital, Islamabad, according to witness accounts posted on the Euro-Mediterranean Seismological Center website and Twitter users.

“Long and strong tremors,” a witness wrote on the center’s website from Kabul. “It was strong,” said another witness from Peshawar in northwest Pakistan.

Pictures published by Afghan media showed houses reduced to rubble and bodies covered with blankets lying on the ground.

The death toll is likely to rise because some villages are located in remote areas in the mountains and it will take some time to gather the details, officials said.

Rescue operations were launched by the authorities, and helicopters were used to reach the wounded and transport medical supplies and food.

There have been no reports of casualties or damage yet in Pakistan.