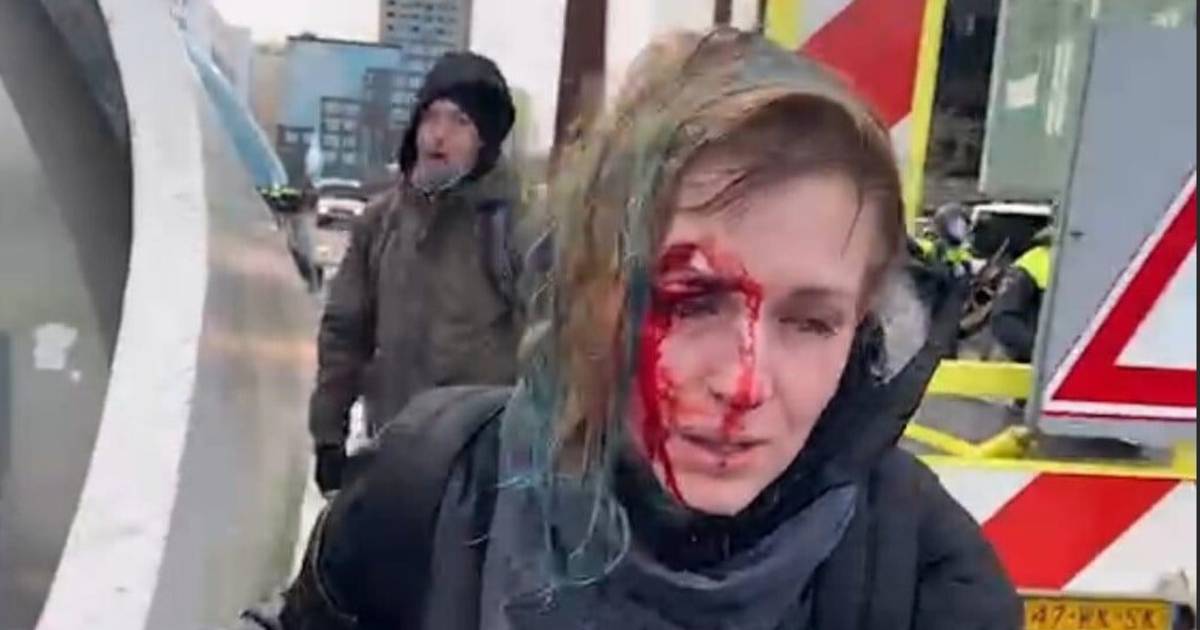 police unions angryThe police reacted with dismay to the decision of the Public Prosecution Service to prosecute the officer who blew a woman over with a water cannon during the curfew riots in Eindhoven early last year. The police unions fear that officers will act with restraint in the next demonstration and that this will be at the expense of their own safety. “We feel let down by the Public Prosecution Service.”

The riots in Eindhoven turned violent on that day. Rioters confronted the police, vandalized and looted shops. Czech Denisa says she accidentally got involved in the chaos, but later it turned out that her friend had thrown a chain lock in the direction of a water thrower, among other things. In response, the water launcher knocked the woman over from a short distance. She hit her head against the wall of a parking garage. Images of the incident went viral on social media. The woman was charged with attempted murder.

According to the Public Prosecution Service, the behavior of the female officer who operated the water thrower was ‘disproportionate’. Justice accuses her of assault, to the horror of the three major police unions. “This is an unfortunate coincidence,” said ANPV chairman Xander Simonis. ,,That colleague never had the intention to spray in the face of that lady. I’ve worked with the water thrower myself for years: it handles very sluggishly and it’s very difficult to aim directly at someone, let alone at someone’s face. There is absolutely no question of intent and that seems to me to be of crucial importance in this case.”

Moreover, according to all police unions, the sprayed woman deliberately took a risk that violence could be used against her. “She was not there by chance and did not leave when she was asked several times,” says Simonis. “It is unfortunate that she was hit right in the face and suffered a serious head injury, everyone agrees on that. But the fact that violence was used is entirely due to herself.”

According to the Public Prosecution Service, an investigation by the National Criminal Investigation Service has shown that the actions of the police are not in accordance with the applicable instruction. A water launcher is intended to disrupt crowds gathered during riots, not to target individuals. The officer involved wanted to stop the man, but a different, less drastic way could have been chosen for this, the Public Prosecution Service ruled.

According to ACP chairman Wim Groeneweg, this is ‘easy to talk about from the comfort of your home’. ,,It was chaos in Eindhoven that day. Agents had to in a split second make very difficult choices to maintain order. A picture is now being painted that the police used unrestricted and thoughtless violence that day, but the heavy violence came from the other side. By now prosecuting with a lot of fuss as the Public Prosecution Service, the police organization is not doing any good. We feel let down, yes.”

‘Lucky that Denisa is still alive’

There is great disbelief within the police force, agrees Jan Struijs, chairman of the Dutch Police Association (NPB), the largest in the Netherlands. “Police officers are very upset. They do their work in good conscience and now see what consequences that could have. The officer in question may be facing a social punishment, which is mentally hard. Police officers are already on their gums. More and more is being asked of them and the workload is increasing all the time. It is to be hoped that the judge will take all that into account.”

The sprayed woman still has physical and psychological complaints, says her lawyer Barbara van Straaten. “If someone kicks someone else’s head, it is immediately attempted murder. This is the same,” she says. “According to her, the officer has used the hardest water jet possible from close by, which means that the risk of serious injury is high. “There has been a lot of disproportionate force here. She is lucky that Denisa survived.”

The unions do not deny that mistakes are made by the police. “But it would be to the OM’s credit if they were a little more careful with this,” says Groeneweg. ,,It’s really not the case that a cop gets up in the morning with the idea to just ram into it. It would be nice if the Public Prosecution Service – and actually everyone in this country – would focus more on our organization. Because what you get now is that the agent in question is already seen as guilty. She is now, as it were, already being hoisted onto the scaffold, which is worrying. Next time, agents may be too reserved, with the result that our safety is at risk. That can have life-threatening consequences.”

The Public Prosecution Service intends to continue to prosecute for assault, but first gives the lawyer time to start proceedings to aggravate the suspicion. It is not yet clear when more will be known about this and exactly when the agent must appear.

In January 2021, a demonstration in Eindhoven got completely out of hand. Police and riot police had difficulty getting the situation under control: