Disclosure of the 2023 Emirates Tour tracks and shirts for women 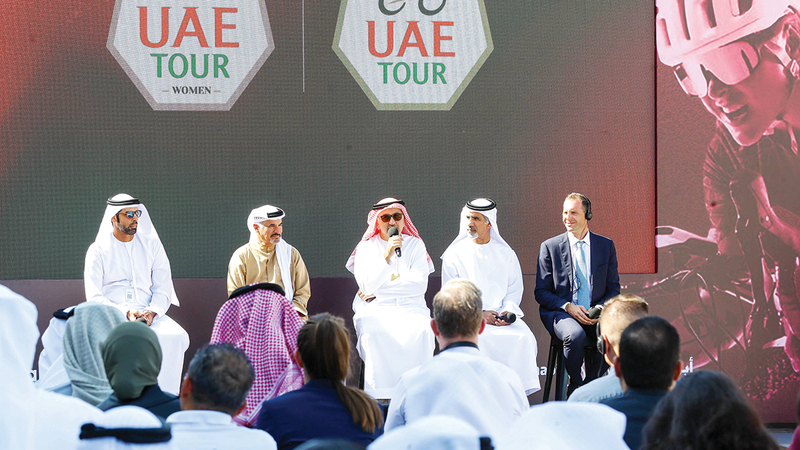 The Abu Dhabi Sports Council, the organizer of the Emirates Tour, revealed the official track, shirts, and sponsors for the first edition of the 2023 Emirates Tour for Women, which starts from Dubai and ends in Abu Dhabi, through four stages with a total of 468 kilometers, during the period from the ninth to the 12th of next February.

The first stage of the Emirates Tour for Women will take place on the ninth of February in Dubai (Port Rashid – Dubai Port) for a distance of 109 km, followed by the second stage on Friday, February 10, which starts from Al Dhafra Castle and reaches the port city for a distance of 133 km, then the third “mountain” stage. Which will be held on Saturday, February 11, for a distance of 107 kilometers, starting from Hazaa Bin Zayed Stadium in Al Ain and reaching the top of Jebel Hafeet, and it will be concluded in Abu Dhabi on Sunday, February 12, starting from the Fatima Bint Mubarak Women’s Sports Academy, and reaching the breakwater on the Abu Dhabi Corniche through 119 kilometers. It is interspersed with many prominent landmarks in Abu Dhabi.

The sponsors of the Tawaf shirts were announced at the press conference (the red shirt is sponsored by the Fatima Bint Mubarak Academy for Women’s Sports, and Her Highness Sheikha Fatima Bint Mubarak, President of the General Women’s Union, President of the Supreme Council for Motherhood and Childhood, Supreme Chairwoman of the Family Development Foundation, “Mother of the Emirates”), and the green shirt is sponsored by BAIC Abu Dhabi. The white shirt is sponsored by Abu Dhabi 360, represented by Nayla Al Balushi, the first female commercial airliner in the Emirates, and the black shirt sponsored by Experience Abu Dhabi, and Noura Al Matroushi, the first Arab and Emirati female astronaut.

The conference also announced the official track, jerseys and sponsors for the fifth edition of the UAE Tour 2023, which starts and ends in Abu Dhabi, and includes four fast stages, two mountain stages, and a 17.2-kilometer time trial stage. During the event, which takes place from February 20 to 26, riders pass through the most famous and natural landmarks in the region.

The International Holding Company sponsors the red jersey, while the white jersey is sponsored by Nakheel, and the black jersey is Sponsored by Experience Abu Dhabi.

■ The first stage, the ninth of February (Port Rashid – Dubai Port, for a distance of 109 km).

■ The last stage, February 12 (from the Fatima Bint Mubarak Women’s Sports Academy to the breakwater on the Abu Dhabi Corniche, 119 km).