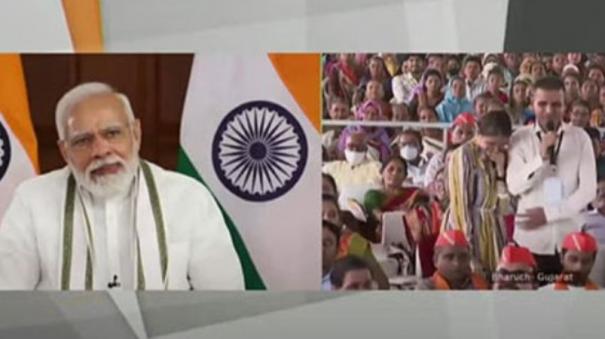 In the state of Gujarat, where the Assembly elections are to be held, the district administration has completed 100 per cent of the four major financial assistance schemes of the state government for widows, the elderly and the abandoned in Bharuch. To mark the occasion, Prime Minister Modi addressed the beneficiaries on video at the Progress Festival (Utkarsh Zamora) held yesterday.

Ayub Patel, a blind user at the time, said his 3 daughters were attending school and his eldest daughter, who was studying Plus 2, wanted to be a doctor.

Immediately Prime Minister Modi, to his eldest daughter, asked why you want to be a doctor? He asked.

He replied that he wanted to be a doctor to cure his father’s visual impairment.

The emotional Prime Minister fell silent for a few seconds.

The Prime Minister then returned to normalcy and told the student, “Your compassion is your strength.”

The 2nd International Summit on Protecting the Corona from Challenges and Building a Strong Global Health Framework was held yesterday. Here is what Prime Minister Narendra Modi said via video:

Corona infection continues to disrupt human life. We followed people-centered strategies to deal with the corona Pandemic in India. To boost immunity, we used traditional medicines. We laid the foundation stone for the World Health Center for Traditional Medicine in India last month. Through this the world will know traditional medicine. To further improve the health care structure, the World Health Organization needs to be reformed and strengthened. India is ready to play a key role in this effort.

Greetings to the nurses

International Nurses Day was celebrated yesterday. In this regard, Prime Minister Modi said on Twitter yesterday:

Nurses play an important role in keeping our planet healthy. Their dedication and kindness embody the best example.

International Nurses Day is a day to reaffirm our appreciation to all nursing staff. I commend all the nurses for their excellent work, even in the most challenging of circumstances.