No Result
View All Result
Latest News
A raccoon climbed into a store in Krasnodar and got on video 30/07/2021
Saudi Arabia opens its doors to tourists starting from this date 30/07/2021
Magaly Medina excited by Alfredo Zambrano’s concert on the island of Croatia 30/07/2021
Industrial production index rose in Lipetsk region 30/07/2021
Anne Hathaway celebrates 20 years of The Princess Diaries: “Miracles Happen” 30/07/2021
Next
Prev
Home World

Distributing 60,000 umbrellas to pilgrims and workers at the Grand Mosque 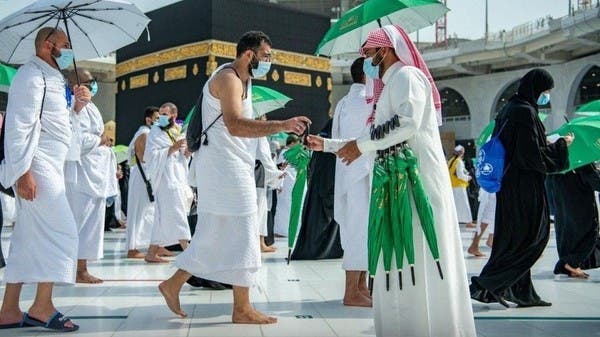 
The General Presidency for the Affairs of the Grand Mosque and the Prophet’s Mosque distributed 60,000 umbrellas today, Wednesday, to pilgrims and workers in the Grand Mosque, as part of the “My Gift is My Umbrella” initiative.

This initiative aims to protect the pilgrims from the heat of the sun during their tawaf al-Ifadah, and to protect the employees of the General Presidency during their service, in addition to protecting security, health and volunteers, whether inside the Grand Mosque or in its courtyards.

Pilgrims sheltering from the sun with an umbrella

The Director of the General Department of Social Services at the General Presidency, Janadi Madkhali, stated that the initiative came within a package of initiatives offered by the Presidency to the guests of Rahman, the aim of which is to protect pilgrims and workers in the Grand Mosque from the heat of the sun, to avoid them falling ill, fatigue or high body temperatures, especially under the circumstances. Corona pandemic and the precautionary measures applied by the General Presidency inside the Grand Mosque.

This initiative comes “out of the Presidency’s concern for the safety of pilgrims during their Tawaf Al-Ifada and the workers of the Grand Mosque, the safety of the employees of the General Presidency, and partners for success from other parties, such as security men, health heroes, volunteers and others.”

Gian Piero Díaz to Johanna San Miguel: “Combat will always be great, even if it hurts you”