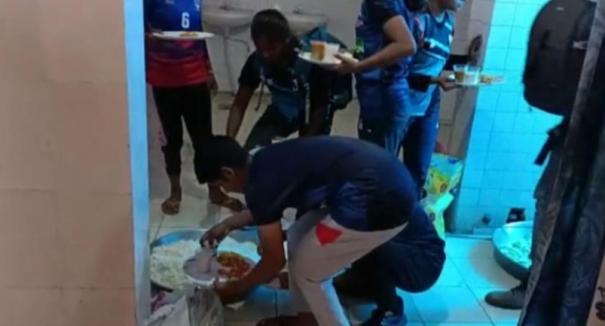 Saharanpur: In Uttar Pradesh, a district sports officer has been sacked after a video surfaced of distribution of food to female kabaddi players kept in a toilet.

State level kabaddi tournament for girls under 17 years was held in Saharanpur, Uttar Pradesh. The containers containing the food items distributed to the athletes who participated in this are placed in the urinal toilet.

There are also puris in a paper next to it. A video of the players taking food from there was released on social media and went viral. Another video was also released showing the staff taking out the utensils from the toilet. It is said that the kabaddi players took a video of this and released it on the 16th.

Many parties have strongly condemned this video. In a message posted by the Congress party on Twitter, the BJP government is spending crores on many programs. But there is no money to make proper arrangements for the kabaddi players.

In a message posted by the TRS party on Twitter, “Food kept in toilets in Uttar Pradesh has been distributed to kabaddi players. Is this how BJP respects sportswomen? Shame on you!”

Subsequently, the Uttar Pradesh government has dismissed Saharanpur Sports Officer Animesh Saxena. Officer Animesh Saxena said that as it was raining, we arranged to cook food near the swimming pool area. Due to the construction work on the playground, food items were kept in the changing room near the swimming pool due to space constraints,” he said.

Regarding this, Saharanpur District Collector Akhilesh Singh said, “Complaints were received that bad arrangements were made for the Kabaddi tournament. I have ordered to conduct an inquiry into this and submit a report within 3 days. Appropriate action will be taken against the wrongdoers,” he said.

Union Sports Minister Anurag Thakur said, “I have ordered strict action against the erring contractor and officials. That contractor’s name will be blacklisted,” he said.