Djokovic: Alcaraz is a candidate for “Roland Garros” 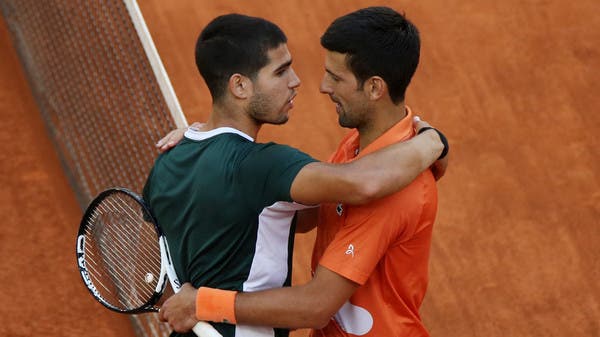 World number one Novak Djokovic praised Madrid Open champion Carlos Alcaraz on Sunday and said the Spaniard is the favorite to win the French Open this month.

Despite an ankle injury, Alcaraz overpowered three of the world’s top five-ranked players in Madrid – Rafael Nadal, Djokovic and Alexander Zverev on his way to his second Masters title days after his 19th birthday.

Djokovic described Alcaraz as a “complete player” and “talker of the sport” after winning four titles this season, the best record of any ATP player.

“He’s definitely exceptional,” Djokovic told reporters in Rome. “He broke several records as a young man, won two Masters titles this year and two (in the ATP tournaments). So he’s the best player in the world this year without a doubt. The way he handled pressure. In our match before Several days he was quiet the whole time… It was amazing. He deserved to win the title.”

The Serbian added, “He will be the leading candidate at Roland Garros, although he has not reached the second week of a Grand Slam before. Given what he achieved in the past period, he certainly deserves to be among the favourites.”

Alcaraz beat compatriot Nadal for the first time in his career in the quarter-finals in Madrid, and the 21-times Grand Slam champion said he was pleased with Spain’s bright future in tennis.

“Everyone knows the confidence he is playing with now, and the level he has reached. (I) am happy for him, and happy to have amazing players in our country in the coming years,” Nadal added.

Alcaraz will miss the Rome Masters in order to recover from an ankle injury and be ready for the French Open, which begins on May 22.