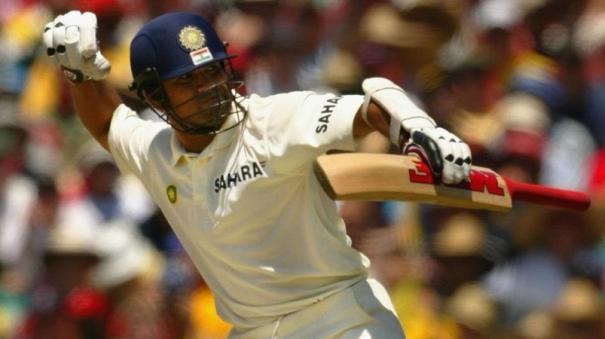 Chennai: On this day in 2004, former Indian cricketer Sachin Tendulkar scored 241 runs without a cover drive. Let’s rewind some of the unforgettable memories of that Test match held at the Sydney Cricket Ground in Australia.

Sachin Tendulkar is known in the world of cricket as ‘Master Blaster’. He has scored a total of 100 centuries in the world of international cricket in both Test and ODI. However, his century in the Test match held at Sydney Stadium in 2004 is very special in his cricketing career. It is special not only for him but for every cricket fan.

In the first 3 matches of the 4-match Test series against Australia, Sachin played 5 innings and scored 0, 1, 37, 0, 44 runs respectively. All these three matches were held in December 2003.

A new year 2004 was born. Along with that, Sachin also changed his game strategy. This time against the same Australian team, he played a classy and classy performance.

The Aussies were very good at bowling Sachin on the 4th and 5th stump line outside the off-stump in that series. Bowlers. He also tried to drive the ball and lost wickets.

But he changed that in the Sydney Test match. He never played the ball that came on that line. He was very firm in that decision. So he never played the cover drive, one of his favorite shots. He batted for 613 minutes in the first innings of that match. He scored 241 runs off 436 balls. This time Sachin could not be dismissed by the bowlers of the Australian team.

He scored 60 runs in the second innings of this match. Even then the opponent could not get him out. In this match, the opposition bowlers who repeatedly bowled on that line and the slip fielders who expected a catch were left disappointed and tired. This is one of Sachin’s best innings.

Was at the SCG in 2004 & learned one of the great lessons in sport. Greatness is not just what you are capable of doing, it’s also what you can stop yourself doing when the occasion demands it. Sachin’s 241* at Sydney without a single cover drive- this is a wagon wheel of his 4’s. pic.twitter.com/koDsKoRaxl