Do you remember the airport child in a cable? A taxi driver found him, and this is his fate 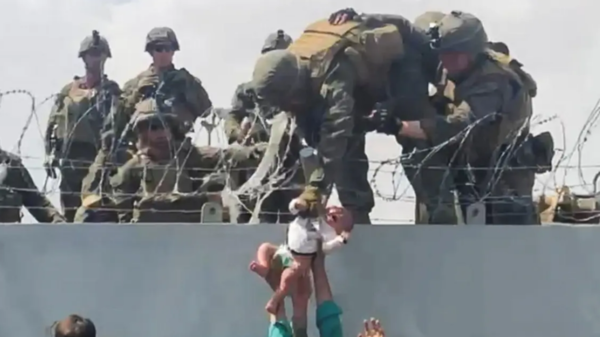 Farewell was not easy for the family of taxi driver Hamid Safi, who found an Afghan child 5 months ago at Kabul Airport, amid the chaos of the evacuations from Afghanistan following the Taliban’s takeover.

Safi and his wife, Freema, hugged the child Suhail for a long time before handing him over to his relatives after searches and investigations, as their tears did not subside at the moment of his farewell.

The story of the child began at Kabul Airport on the nineteenth of August 2021. Amidst the crowds at Kabul Airport, Mirza Ali Ahmadi handed his son Sohail, who was only two months old at the time, to a foreign soldier, hoping to meet him within a few minutes.

At that time, the image of that scene swept the media globally, and the communication sites alike.

While it is not clear what happened after those difficult moments, taxi driver Hamid Safi later found the child crying alone on the airport floor, on the same day.

Safi, who was at the airport to help his brother leave, said he took him to a few women to breastfeed him, but they refused, then searched for his family a lot without success, so he brought him home.

Hamid Safi and his wife with the child Sohail (Reuters)

He also confirmed that he and his wife searched for a long time for the child’s family, and when they lost hope, they named him Muhammad Abd and decided to take care of him.

In contrast, Ahmadi, who worked at the US Embassy in Kabul, spent three days looking for his son at the airport, but finally decided to leave with his wife and four children on an evacuation flight to the United States.

While Sohail was spending time with Safi’s three daughters, his anxious family made no effort to find him.

Only a few days ago, with the help of the police and social media, Sohail’s relatives were found in Kabul, and the child was finally handed over to his grandfather.

For his part, the child’s grandfather, Mirza Muhammad Qasemi, invited Safi’s family to his house in Kabul last Sunday, to spend some time with Sohail, whom Safi’s wife, Freema, did not stop hugging and kissing.

The grandfather did not hide his joy at having his grandson by his side after months of searching for him, and seeing his daughter drowning in her grief. “She was crying and eating nothing,” he said, wiping the tears that fell on his cheeks.

The next task for the family is to get Sohail to his parents in the United States, and until then his aunt will take care of him.