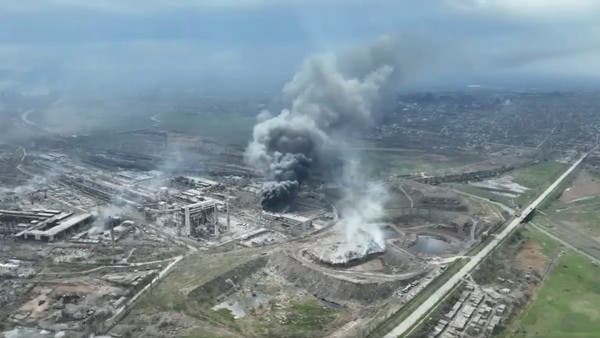 While the situation is still the same in the city of Mariupol in southeastern Ukraine, especially in the huge steel plant in Azovstal, which is besieged by Russian forces, and which has attracted international attention in recent days, the pro-Moscow Donetsk separatists accused the fighters holed up in it of preventing the exit of civilians.

Denis Pushilin, President of the separatist “Donetsk Republic”, said in statements to Al-Arabiya/Al-Hadath today, Saturday, that those he described as “terrorists are sheltering with civilians in the factory, and they take them as hostages.”

He also stressed at the same time that “humanitarian corridors have been extended for a long time, especially for civilians, “who considered that their safety is secured by the Russian and pro-Russian forces on the ground.”

Steps to the United Nations

However, he accused “nationalists of preventing their exit”, pointing out that the expulsion of some of them occurs through agreements with specific people. He added that the coming period will prove whether it is possible to expel them all from Azovstal.

He also explained that steps will be taken by the United Nations soon to expel them, adding, “We will see how the method will be and whether it will be successful!”

When asked if any special military operation would soon reach Azovstal, he replied that he could not give any details.

For his part, Konstantin Ivashenko, the mayor of Mariupol appointed by the Russian forces that took control of the coastal city several days ago, said that during this stage, the Azovstal region is witnessing hostilities and clashes.

He explained that “some civilians managed to escape from the factory, but he considered that the remaining civilians in the place stand as a barrier to the elimination of the Arov Brigades.

Azovstal.. the last of the castles

It is noteworthy that the sprawling Azovstal complex, a large part of which was destroyed by Russian bombing, is the last enclave in which the organized Ukrainian resistance is holed up in Mariupol. It is estimated to house about 2,000 Ukrainian soldiers and 1,000 civilians in bunkers under the destroyed building.

It is noteworthy that the city of Mariupol overlooking the Sea of ​​Azov has formed, since the launch of the Russian military operation on the territory of its western neighbor, on February 24, a strategic goal for Moscow, since its control will open land corridors for the movement of Russian forces between eastern Ukraine and Crimea, which Moscow annexed to its territory in 2014. .