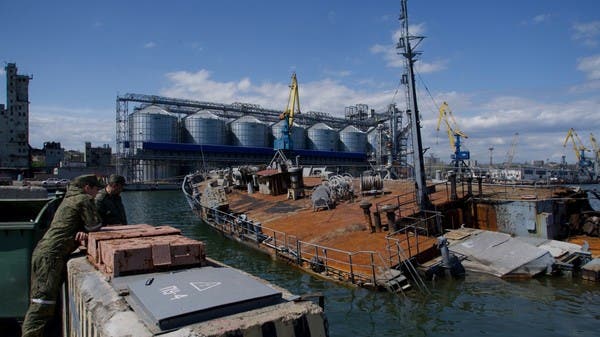 Donetsk region separatists accused Ukrainian forces of burning tons of grain in storage facilities during their withdrawal from the port of Mariupol.

Yan Gajin, advisor to the president of the breakaway republic of Donetsk, revealed that there is a large amount of grain in the port of Mariupol, which is corn and wheat, indicating that it is not suitable for further use.

He added, that the Ukrainian forces set fire to the port’s granaries when they were retreating, so that this grain would not go to Donetsk so that it would be impossible to use it in any way, according to what was quoted by the Russian “Sputnik” agency.

He also explained that the firefighters worked to put out the fires for several days, as a result of which the grain had completely spoiled and could not even be used as livestock feed.

It is noteworthy that in May (2022) Russian forces took full control of Mariupol after a siege that lasted for weeks, and ended with the surrender of the last pocket in the city, Azovstal, the sprawling steel factory, after the surrender of Ukrainian fighters who had holed up in it for weeks.

The port of Mariupol is the second most busy port after Odessa on the Black Sea, before the launch of the Russian military operation on the territory of the western neighbor on February 24.

From the city of Mariupol – Reuters

Moscow announced last month that the port would be reopened, after the Russian army removed mines planted on an area of ​​1.5 million cubic meters, while demining experts are working in the port and on board ships anchored there.