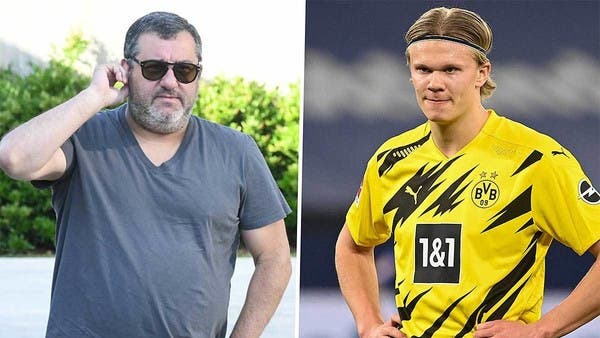 Sebastian Kehl, director of the professional players sector at the German club Borussia Dortmund, confirmed on Saturday that what was raised about the presence of Norwegian striker Erling Haaland, the team’s top scorer, for the funeral ceremony of the body of his agent Mino Raiola, without the club’s blessing, is incorrect.

Raiola, 54, died last week and was buried in Monaco last Thursday in the presence of Haaland and his colleague Donel Malin, who was also contracted with Raiola.

“There were reports that he was not allowed to attend Mino’s funeral due to fatigue,” Kiehl said after the 3-1 win over Gruyter Fürth on Saturday.

Haaland, who scored three goals (hat-trick) during the 3-4 loss to Bochum last week, was deeply affected by Raiola’s death.

Kiehl added: These are not easy days for him, it can be said that he was deeply affected by the matter, as he had a very close relationship with Raiola, like Malin, so there is nothing to talk about allowing him to attend the funeral on Thursday.

It is widely expected that Haaland, who scored 21 goals in 22 matches in the Bundesliga this season, will leave Dortmund in the coming months, and move to Manchester City, which is considered the closest to the Norwegian striker.

Dortmund wants to compensate for the possible departure of Haaland by including Karim Ademi, the top scorer of Austrian Red Bull Salzburg.

“I said last week that I had a very good feeling,” Kiehl said of Adeyemi’s future. It got better during the week. We are on a good path.