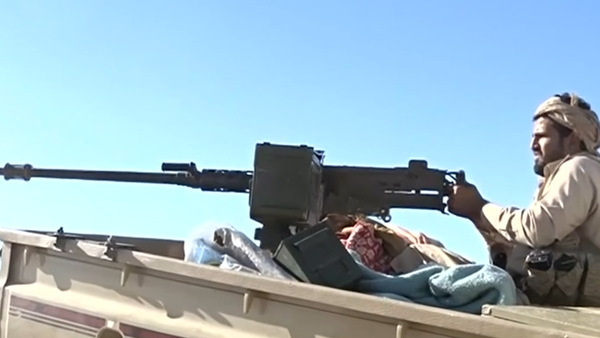 Today, Monday, the Iranian Houthi militia incurred heavy losses in equipment and lives by the fire of the National Army and the popular resistance, and as a result of the strikes of the fighters of the Coalition to Support Legitimacy in Ma’rib Governorate.

Violent battles took place on the western and southern fronts of Ma’rib, coinciding with aerial and artillery bombardment targeting Houthi militia movements and reinforcements throughout the theaters of combat operations.

Military leaders in Shabwa with the commander of the giants forces

The confrontations and coalition strikes resulted in the death and injury of dozens of Houthi militia members, in addition to the destruction of combat vehicles and crews.

In this context, the security and military leaders in Shabwa governorate received the forces of the giants coming to the governorate, under supreme presidential directives, for the participation of the National Army and the Resistance forces in the liberation operations of the Bihan and Ain districts.

This step was widely welcomed by the security and military leaders, especially at this stage that requires reunification and gathering the word to confront the common enemy represented by the terrorist Houthi militia.