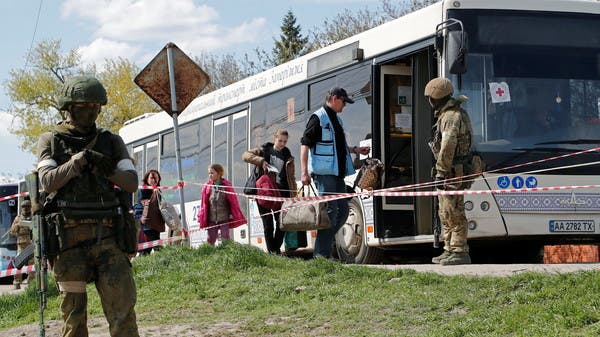 The United Nations has confirmed that an evacuation is underway for holed up people from a steel plant in the Ukrainian city of Mariupol.

UN humanitarian spokesman Saviano Abreu told The Associated Press on Sunday that efforts to get people out of the sprawling Azovstal steel plant are being done in cooperation with the International Committee of the Red Cross and in coordination with Ukrainian and Russian officials. He described the situation as “extremely complex”.

The United Nations also confirmed that the evacuation process from Azovstal began on April 29, in cooperation with Russia, adding: “Work is underway to open a safe passage for civilians from the Azovstal factory.”

In turn, Ukrainian President Volodymyr Zelensky announced today that the evacuation process from the Azovstal plant “has begun” and about 100 civilians are heading to the “territories controlled” by Ukraine.

“The process of evacuating civilians from Azovstal has begun. A first group of about 100 people is heading to the territories controlled by (Ukraine). Tomorrow we will receive them in Zaporizhia,” Zelensky wrote in a tweet.

For its part, the Russian Defense Ministry said today that 80 civilians were evacuated from the Azovstal plant. She added that the evacuees who wanted to go to the areas under Ukrainian control were handed over to representatives of the United Nations and the International Committee of the Red Cross.

As many as 100,000 people are believed to remain in the besieged Mariupol, including up to 1,000 civilians who were massed with an estimated 2,000 Ukrainian fighters under the sprawling Soviet-era Azovstal factory, the only part of the city not controlled It’s after the Russians.

Earlier in the day, a group of about 40 civilians was evacuated today from the Azovstal factory in a convoy of vehicles bearing the UN emblem.

In one of the first signs of an evacuation agreement, a Reuters photographer said that a group of about 40 civilians arrived today at a temporary shelter after leaving the area around the Azovstal factory.

Reuters pictures showed civilians arriving in the village of Bizymin in the Donetsk region, about 30 km from Mariupol, in buses bearing Ukrainian plates, as part of a convoy that included Russian forces and vehicles bearing the United Nations emblem.

After meeting with Ukrainian President Volodymyr Zelensky in Kyiv on Thursday, UN Secretary-General Antonio Guterres said that an intense discussion was underway to complete the evacuation from Azovstal.

For its part, the Russian Defense Ministry said today that two groups of civilians left the residential area around the Azovstal plant on Saturday.

“On April 30, after the ceasefire and the opening of a humanitarian corridor, two groups of civilians left the residential buildings adjacent to the Azovstal Metal Factory area,” the ministry said on the Telegram app.

“In the afternoon, 25 residents came out. In the afternoon a second group of 21 people left and were taken to Bizimenoy,” a town east of Mariupol, halfway between the port city and the Russian border, she added.

The Russian authorities confirmed the provision of “shelter, food and necessary medical care to all civilians.” The authorities did not specify where the first group was transferred.