Draw for the Mubadala World Tennis Championship in Abu Dhabi 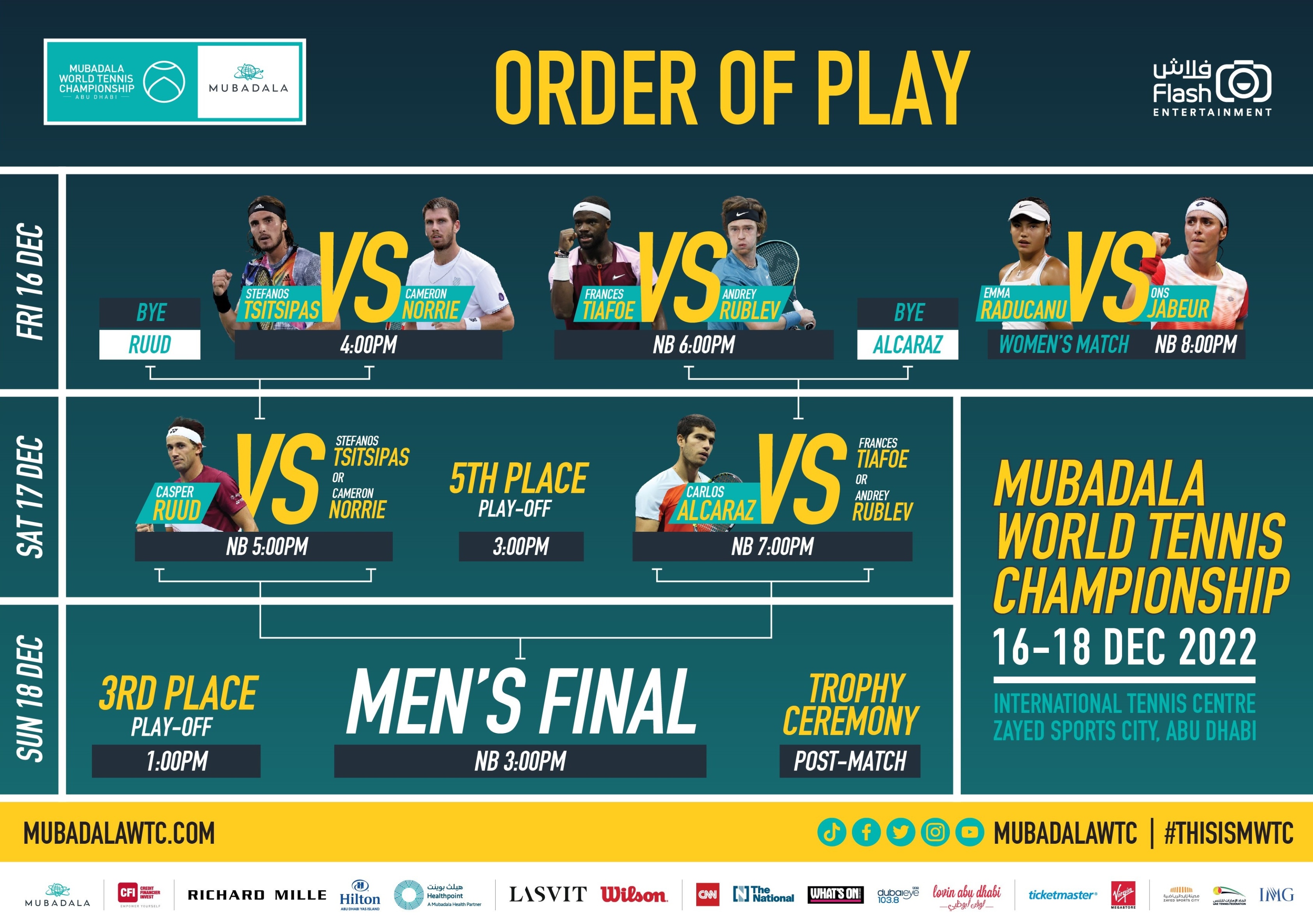 The organizers of the Mubadala World Tennis Championship revealed the schedule of the upcoming matches by displaying them on the Mubadala Tower, three weeks before the start of the 14th session of the tournament, which will last for three consecutive days on the grounds of the International Tennis Center in Zayed Sports City, with the participation of elite players from around the world.

Stefanos Tsitsipas, ranked fourth in the world, and Cameron Norrie, ranked first in Britain, will open the matches of the first day on December 16 at 04:00 in the afternoon; While the second match kicks off at 06:00 pm, to bring together defending champion Andrey Rublev and Frances Tiafoe, who qualified for the semi-finals of the US Open Tennis Championships in 2022.

The activities of the first day conclude with a women’s match that will witness an exciting confrontation at 08:00 pm between Tunisia’s Anas Jaber, ranked second in the world and who qualified for the final of the two Grand Slam tournaments in 2022, to defend her title against Emma Raducano, ranked number one in Britain.

The next day’s activities start with the fifth-place match at 03:00 pm; Followed by the semi-final matches, which witness the participation of Carlos Alcaraz, the world number one, who is participating for the first time in the Middle East region, and Casper Rudd, the world number three. The Norwegian Ruud will face the winner of the match between Tsitsipas and Nuri at 05:00 in the evening, then the Spaniard Alcaraz will enter the field in front of the qualifier between Tiafoe and Rublev at 07:00 in the evening.

The last day will witness an enthusiastic competition for the third place at 01:00 in the afternoon, then the upcoming final match at 03:00 in the afternoon, after which the ceremony will be held to crown the winner of the Mubadala World Tennis Championship title. The organizer was keen to set the dates for the final matches in advance to take into account the date of the final match of the FIFA World Cup, which kicks off at 07:00 pm UAE time, so that fans can enjoy attending the final of the two tournaments.

The Family Tennis Village opens its doors daily from 12:00 noon throughout the three days of the tournament, ensuring that ticket holders benefit from excellent food and beverage offers, tennis clinics, participation in dialogue sessions with players and other tennis-related activities.

John Lekrich, CEO of Flash Entertainment, said: “The sports tournament draw is an exciting moment that marks the approaching date of the matches. This year’s draw revealed special matches between Tsitsipas and Nuri, who aspire to break the record of tied wins in matches that they collected before, while Tiafoe faces His counterpart Rublev after the match that brought them together in the quarter-finals of the US Open, in addition to the women’s match, which always presents an enthusiastic confrontation. This means that the Abu Dhabi fans are on a date with a wonderful competitive atmosphere that brings together elite tennis players throughout the three days of the Mubadala World Tennis Championship.