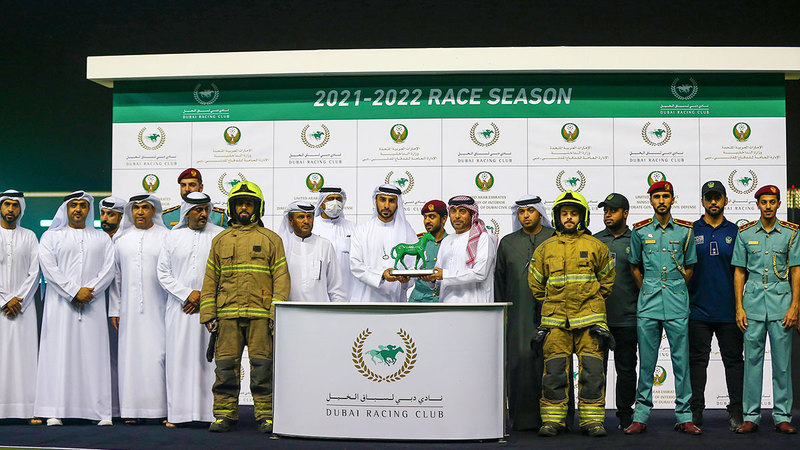 The second race in the new season of the Meydan International Racecourse witnessed, the day before yesterday, the honoring of the Dubai Racing Club for the first line of defense in Dubai, which are the authorities that provided an honorable national performance in the face of the “Covid-19” pandemic, in appreciation of the unparalleled giving of its elements. By honoring the Dubai Police General Command, the General Directorate of Civil Defense, the Dubai Health Authority, the Roads and Transport Authority, the Dubai Municipality, the Dubai Corporation for Ambulance Services, and the Dubai Government Media Office.

The seven runs included in the race evening bore the names of the seven government agencies, and the evening witnessed the celebration of the 51st Omani National Day, which falls on the eighteenth of November of each year, and coincided with the date of the race, where the Dubai Club celebrated this occasion, in the presence of the Sultanate of Oman’s ambassador to the country. The state, Dr. Ahmed bin Hilal Al Busaidi, along with a number of officials, in confirmation of the well-established brotherly relations between the two brotherly countries and peoples.

Al-Adab said in a press statement: “The wise leadership of the UAE has harnessed all capabilities to preserve the health and safety of citizens, residents and visitors during the pandemic period. The first defense is their right, they deserve all thanks, and we have all respect and appreciation for what they presented as the most wonderful models of belonging and dedication to serving the community and ensuring the safety of its members.”

The horse “RB Rich Like Me” for Victoria and Fawzi Nass won the first half title in the Baniyas Championship, which was held under the auspices of the Dubai Police General Command.

The second half was held under the auspices of the General Directorate of Civil Defense – Dubai, and went to the benefit of “Ticking Names”, owned by Sheikh Mohammed bin Obaid Al Maktoum.

The title of the third round, sponsored by Dubai Municipality, returned to “KFU” by Sheikh Mohammed bin Khalifa Al Maktoum, while he won the title of the fourth round, “Imperial Empire” for Al-Rasheed Stables, sponsored by the Roads and Transport Authority. The fifth round was held under the auspices of the Dubai Health Authority, and was crowned by Faithfull Soldier, owned by AL Butler.