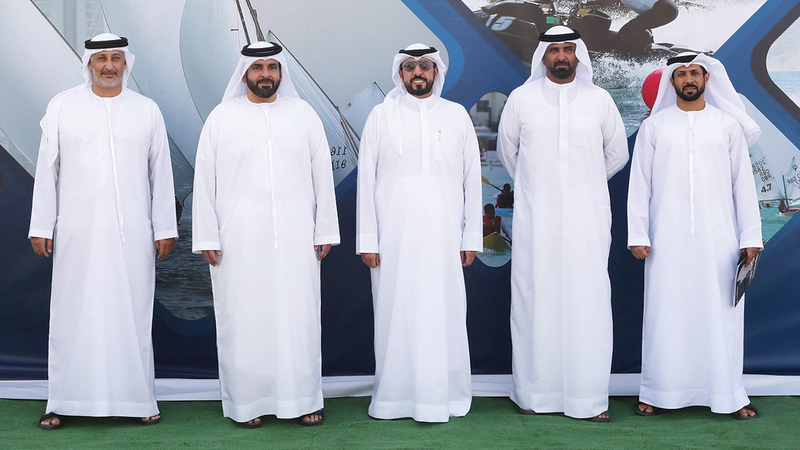 The Supreme Organizing Committee of the 31st Al Gaffal Race for 60-foot local sailing ships, which is organized by the Dubai International Marine Club the day after tomorrow, put the final touches before the club’s convoy headed to Sir Bu Nair Island this morning. The organizing committee held a consultative meeting to review the preparations at the race village headquarters on the front of “Dubai Harbor”, headed by Ahmed Saeed bin Meshar, Chairman of the Board of Directors of the Dubai International Marine Club.

The meeting was preceded by an inspection tour of the racing village, which includes the green square in the heart of the new tourist facade in Dubai Harbor, which will witness the coronation ceremonies on the Champions’ podium, as well as the giant tent that hosts the “Al Qaffal” studio for Dubai Media Incorporated channels, the media partner, and the VIP guest hall. And the heritage exhibition “Al-Dana’s Story”, organized by the Al-Qaffal Foundation for Events, under the supervision of the expert on maritime heritage, Mustafa Al-Fardan.

The Higher Organizing Committee approved the equipment of the Dubai Maritime Committees, and the existing coordination with success partners from government departments and national institutions, with the approaching date of the event, which will start in the early hours of the morning after tomorrow.

The convoy of “Dubai Maritime” today, in order to supervise the reception of the participants in the Al-Qaffal race from Port Rashid on board the old yacht (Zabeel), includes members of the technical committee and arbitration committees, in addition to the medical team that will accompany the participants, and stationed on the island before the race, then departs Senyar left the ships with the start of the race from Sir Bu Nair Island on Saturday, towards the shores of Dubai for more than 50 nautical miles, reaching the finish line opposite the Burj Al Arab hotel.

The convoy includes members of the technical committee, jury committees and the medical team, and will supervise the race.