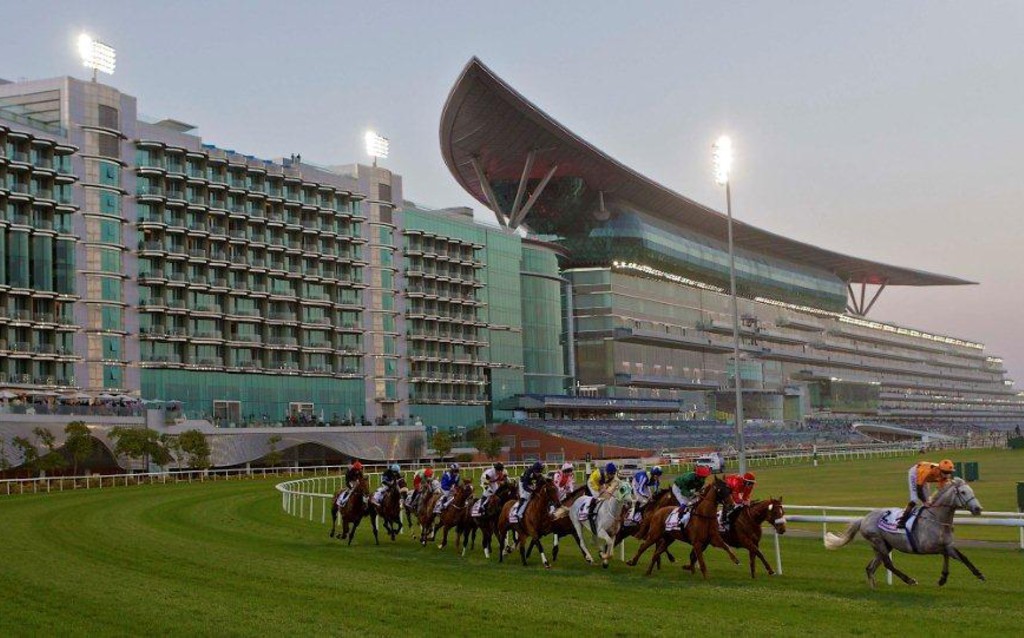 Dubai Racing Club announced the organization of the “Golden Jubilee” evening at the Meydan International Racecourse on the occasion of the celebration of the 50th National Day of the United Arab Emirates on the second of next December, coinciding with the date of the third evening of this season at the international track, where the celebration program will include seven distinct runs. Under the auspices of the armed forces and military units in the country and with the participation of the sons of the nation’s righteous martyrs who will present prizes in the evening to the winners, along with representatives of the armed forces and military units.
The seven races bear the name of each emirate of the country. The evening will launch the first race, the “Abu Dhabi” run, sponsored by the Land Forces, followed by the second run, “Dubai”, sponsored by the Navy, the third race, “Sharjah”, sponsored by the Air Force and Air Defense, and the fourth race, “Ajman”. Under the auspices of the Presidential Guard, the fifth round “Umm Al Quwain” sponsored by the joint aviation, the sixth round “Ras Al Khaimah” sponsored by the reserve force, then finally caught the conclusion in the seventh round “Fujairah” under the auspices of the National and Reserve Service Authority. The evening will also witness the organization of national celebrations that include many wonderful events, including the competition for the best Emirati dress for males and females of different ages, in addition to other special segments to celebrate this precious national occasion.

On this occasion, Sheikh Rashid bin Dalmouk Al Maktoum, President of the Dubai Racing Club and Dubai Equestrian Club, expressed his pride in commemorating the National Day at Meydan Racecourse through the “Golden Jubilee” evening, where the event will be a national sports wedding that celebrates half a century of achievements. Over the 50 years since the founding of the United Arab Emirates, I extend my warmest congratulations and blessings to His Highness Sheikh Khalifa bin Zayed Al Nahyan, President of the State, His Highness Sheikh Mohammed bin Rashid Al Maktoum, Vice President and Prime Minister of the UAE and Ruler of Dubai, and His Highness Sheikh Mohammed bin Zayed Al Nahyan, Crown Prince of Abu Dhabi and Deputy Supreme Commander of the Armed Forces, and Their Highnesses, members of the Supreme Council of the Union and Rulers of the Emirates, asking God Almighty to perpetuate the UAE’s leadership, government and people progress, prosperity, security, safety and stability.
Sheikh Rashid bin Dalmouk Al Maktoum added, “The Dubai Racing Club is keen to actively participate in national and community events, especially in this national evening, which will bring together equestrian people and horse racing lovers on a national day in which everyone competes to win the most expensive titles bearing the names of each emirate in our beloved country. The patronage of the armed forces and military units, and the participation of the sons of the nation’s righteous martyrs in the ceremony, is a touch of loyalty and gratitude on this great day for everyone who sacrifices the most for the sake of the nation’s advancement and security.

historic celebration
Sheikh Rashid bin Dalmouk Al Maktoum stressed that the fiftieth anniversary of the founding of the United Arab Emirates is a historic celebration of the development and renaissance process through which the country has made many achievements in the field of internationalism, most notably hosting the Expo 2020 Dubai, the first global event of its kind in the region. The Middle East, Africa and South Asia, and the success of the launch of the “Hope Probe” in the first Arab mission to Mars to study the weather and climate of the Red Planet, in addition to many other global achievements.

The second of December is considered a great milestone in the march of the nation and its people. Through this day, we look forward to the aspirations of the future and continue the process of construction and development after half a century of leadership and success in the establishment of the union, which laid its foundations, the late Sheikh Zayed bin Sultan Al Nahyan and Sheikh Rashid bin Saeed Al Maktoum, may God rest his soul, and their brothers, the rulers of the Emirates.

The most beautiful national costume
During the golden jubilee evening, five winners of cash and in-kind prizes will be announced in the competition for the best Emirati costume, and the Dubai Racing Club management has invited all those wishing to participate of all ages, males and females.

The sponsorship of the armed forces and military units for the ceremony comes in honor of the glorious verses of sacrifice and redemption offered by our valiant armed forces, and for the heroism and honorable achievements they achieve in all the tasks entrusted to them inside or outside the country.