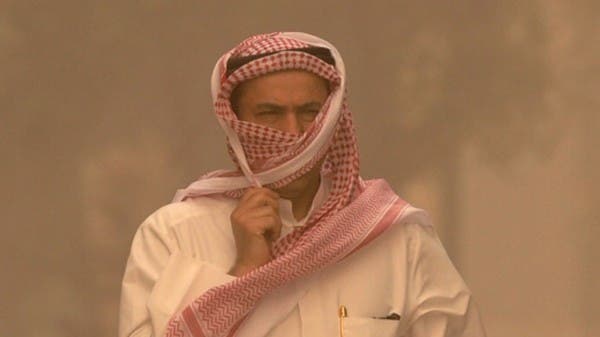 A dust storm loaded with tons of dust and collected dust hit and Shaqra, and reached the outskirts of the governorates north of Riyadh; It is expected to arrive in Riyadh and the Eastern Province in the coming hours.

The dust storm formed in the deserts of Iraq, and passed through the State of Kuwait, before arriving this evening in Hafr Al-Batin and Al-Artawiyah. As the dust storm reached the Saudi capital, in the early hours of Tuesday, it was loaded with dust and dust.

The storm also affected the governorates of the central region and the eastern region, and it will limit the range of visibility, and it will affect those who suffer from respiratory problems; It is walking slowly, and scattered grains of dirt and dust in the air.

For its part, the Ministry of Health warned asthma patients, children, the elderly and heart patients, of the current dust wave in several regions, noting the need to follow preventive methods to avoid respiratory crises.

The ministry recommended, in a video on its Twitter account, the need to follow the instructions of civil defense and meteorology regarding dust waves, avoid going out during a sandstorm, staying in places with good ventilation devices, closing sources from which air may run out of the house, and covering the nose and mouth when going out. Extreme caution while driving, putting home air conditioners on redistribution mode, and going to the emergency if you feel any symptoms.

For his part, the former professor of climate at Qassim University, and the founder and head of the Committee for the Nomenclature of Distinguished Climatic Conditions in Saudi Arabia, explained the names of Dr. Abdullah Al-Misnad, that the eastern region and Riyadh, through his account on Twitter, are defined by the white stuck dust, urging everyone to use advanced masks, and a process that is worn during dust storms, especially when when Dust atmospheres are like white fog.

He also called on the concerned authorities to plant monitoring stations to measure the extent of pollution and the spread of aerosol density in cities and governorates, and to make the digital indicator available to the public.

He added that dust when its color in the sky is white, like the color of fog, tends to white, as it is the most dangerous type for the respiratory system, and it is the suspended and transported dust that resists gravity due to its lightness and small size. It reaches the lung and settles in it for a long time, forming this foreign body health problems that are not hidden from doctors, including that it endangers lung functions, asthma, and inflammation of the respiratory system.

1
When the #the dust In the sky its color is like color #the fog It tends to white, as this is the most dangerous type for the respiratory system.
It is the suspended dust #couple Which resists gravity due to its lightness and small size.
In other words, tens of atoms of aerosol can anchor over the tip of the hair that is pointed in our eyes!
Watch the photo report: pic.twitter.com/07MllkP7Ub

In turn, the weather researcher, member of the Climatic Nomenclature Committee Abdulaziz Al-Hussaini, expected surface wind activity, during the coming hours of Tuesday, from moderate to semi-strong, especially in the eastern region, and between Riyadh and Sharqia, south of Riyadh and Sharqia.

He explained through his account on “Twitter”, that the dust storm affected 5 countries; Where she grew up in Iraq, Kuwait, Saudi Arabia, Bahrain and Qatar.

Do not forget the prayer of the wind
1- Through weather observatories, the dust storm of Iraqi origin:
It is still applied this morning, Tuesday, to parts of the Riyadh and Eastern regions, including the capital, Riyadh, and most of it is light to semi-dense.
..Follow pic.twitter.com/uH8vSEkUN7

Advanced alert for the Riyadh region

The Meteorological Center also indicated in an advanced alert to the Riyadh region that it is witnessing raised dust with activity in the surface winds, and a near absence of horizontal vision. The case includes Dawadmi, Al-Rain, Al-Quway’iyah, and Afif, and it will continue until 11.00 am on Tuesday, while the center warned the region of sandstorms, including Al-Kharj, Al-Kharj, Al-Diriyah, Al-Dalam, the capital Riyadh, Al-Muzahimiyah, Huraymila, Hotat Bani Tamim, Dharma and Murat, and will continue until five in the morning.

In addition, the eastern region is also witnessing raised dust and almost lack of horizontal visibility. The case includes Al-Ahsa, Al-Udeid, and Abqaiq, and continues until 03:00 on Tuesday morning.

He warned the region of sandstorms, including Jubail, Khobar, Dammam, Dhahran, Qatif, Qaisumah, Nairiyah, Hafr Al-Batin, Ras Tanura and Olaya Village, and will continue until four in the morning.

The center warned the Hail region that it is witnessing active winds and raised dust, with a decrease in the horizontal visibility. The case includes the wall, Al-Salimi, Al-Shamli, Al-Shannan, Al-Ghazalah, Al-Kahfa, Al-Mustajdah, Baqa’, Hail, Samira, Ghazlana and Muwaq, and will continue until 10:00 a.m. on Tuesday.

The Al-Madinah Al-Munawwarah region is also witnessing active winds and raised dust, with a decrease in the horizontal visibility. The case includes Hanakia, Madinah, Al-Mahd, and Khaybar, and continues until 17:00 on Tuesday evening.