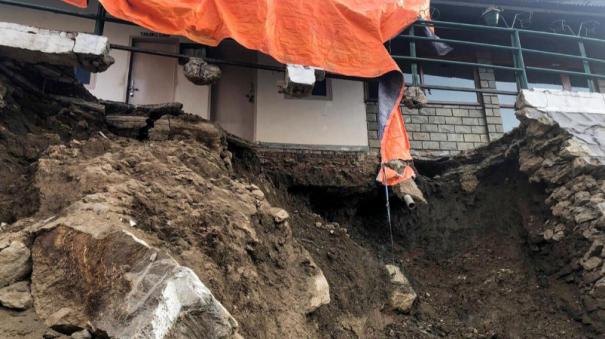 Samoli: District Judge Samoli said that the Joshimath Nagar area has been declared a disaster prone area as landslides and landslides continue to occur.

Samoli district judge Himansu Khurana said today, “Joshimath area has been declared a disaster area. Two teams of the central government, including a team from the Jal Shakti Ministry, are coming here. All construction work has been stopped in Joshimath and its surrounding areas. Food items have been provided to the affected people. The basic needs of the people who are staying in the relief camps. “The district administration is constantly monitoring. All assistance is provided to those who need it. The district administration is immediately carrying out inspections in the required areas,” he said.

Meanwhile, officials said that 603 buildings in Joshimath town are still erupting and a total of 68 families have been temporarily shifted.

In a statement issued by the District Disaster Management Organisation, “According to the Disaster Management Act 2005, both Hotel Mount View and Mallari Inn have been advised to cease operations till further orders. At present, only 229 rooms have been identified as suitable for temporary accommodation in Joshimath area, out of which 1271 people can be accommodated.” .

As per Section 33, 34 of the Disaster Management Act, people living in landslide prone areas of Joshimath have been ordered to evacuate immediately to prevent danger to life and property.

Until further orders, all work on Thabovan Vishnugat Hydroelectric Project of National Thermal Power Company has been suspended. “Also, the construction work of the Ho Hare Helong Bypass by the Border Roads Authority and all the construction work being done by the Joshimath Municipality will be stopped immediately,” it said.

The reasons for this damage to the holy city are still unclear. Retired scientist of National Science Center (INSA) DM Banerjee said, “Roads and mining constructions near hydropower projects are the reasons for this problem. The rocks at Joshimath date back to the Cambrian period. The place belongs to seismic zone 4. Apart from these, 3,4 Big houses with floors should not be built in these areas,” he said.

What is the background? – The town of Joshimath is situated at the foothills of the Himalayas in Samoli District, Uttarakhand. This town is the gateway to Badrinath temple. There are around 4,500 buildings in Joshimath including houses, hostels and hotels. About 30,000 people live there. At the end of last December, there were huge cracks in various houses and commercial buildings in Joshimath city.

On December 24, the public gathered and staged a huge protest to draw the government’s attention to the issue of Joshimath city. Vishnugat hydroelectric power station project and Sar Dham highway work has been stopped due to day by day cracks in the main road and buildings. Uttarakhand Chief Minister Pushkar Singh Thami visited Joshimath yesterday. He directed the officials to take the public to safe places.

More than 200 families have been accommodated in relief camps set up in hostels, hotels, schools and colleges. It has been announced that a monthly assistance of Rs.4,000 will be given to a family on behalf of the State Government. In this context, Prime Minister Modi held a telephone consultation with Chief Minister Pushkar Singh Thami on the issue of Joshimath city yesterday.

Meanwhile, a high-level consultation meeting was held yesterday on behalf of the Prime Minister’s Office regarding Joshimath city. Cabinet Secretary, National Disaster Response Force officials, senior officials of Uttarakhand, Joshimath District Collector and many others participated in the video meeting chaired by P.K. Mishra, Principal Secretary to the Prime Minister.

Swami Avimukteswaranand Saraswati has filed a Public Interest Litigation in the Supreme Court on behalf of the Joshi Mutt in Joshimath Nagar. “The current problem in Joshimath should be declared as a national calamity. There is no need for development projects that destroy the environment and human life. The petition demanded that government schemes should be stopped immediately.