Eastbourne tournament.. Jaber’s injury forces her and Serena to withdraw 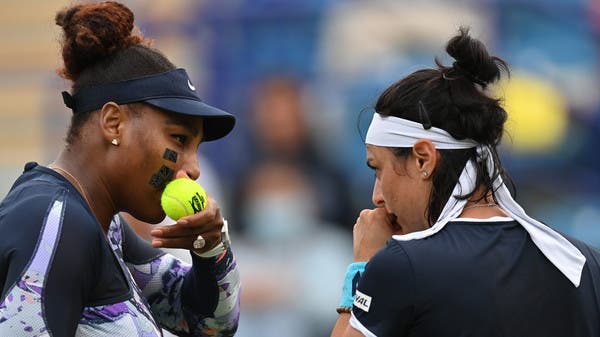 Tunisian Anas Jaber, ranked third in the world, was forced to withdraw from the Eastbourne Tennis Tournament along with veteran American Serena Williams in the doubles competitions, due to a knee injury, organizers announced on Thursday.

A statement from the organizers stated that the duo “Jaber/Williams withdrew from their semi-final match due to an injury to the right knee of Anas Jaber.”

Serena, 40, returned to competitions in Eastbourne after a year-long absence since her withdrawal from the first round of Wimbledon last year due to injury, and chose to play with Jaber in the doubles competitions and reached the semi-finals after winning the first two matches.

However, the American’s career will stop at this point, as she participates in Wimbledon, the third grand slam, in her first singles match, after the 1204-ranked world number one is currently on an invitation to participate, knowing that the draw will be held on Friday.

As for Jaber, she will hope that she will be ready for the tournament, which begins next Monday, and will be one of the most prominent candidates to compete for the title, in sympathy with the levels she presents this season, after winning the Madrid tournament title and runner-up in Rome, both within the thousand sessions on dirt and her achievement of the Berlin tournament title on grass this week. Past.

Serena had crowned her comeback on Tuesday with a victory, along with Jaber, over Czech Marie Bozkova and Spain’s Sara Soribis Tormo, and in the quarter-finals on Wednesday against Japan’s Shoko Oyama and Taiwan’s Chan Hao-cheng, and they were scheduled to play in the semi-finals against Poland’s Magda Linnet and Serbian Alexandra Krunic.