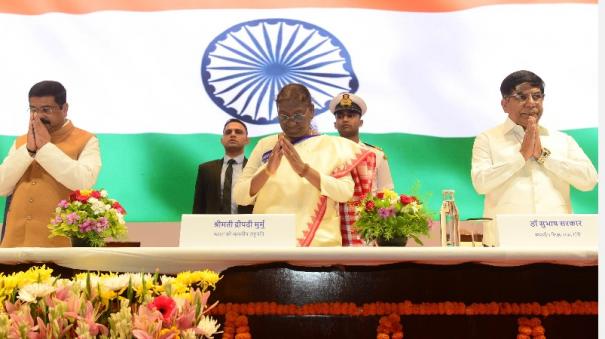 New Delhi: The 60th anniversary celebration of IIT Delhi was held yesterday. President Drabupati Murmu participated in this. Speaking at the ceremony he said:

IITs have proved to the world India’s prowess in the fields of education and technology. The history of IITs is the history of independent India. IITs have played a major role in India’s rise to prominence in the global arena.

A digital revolution is taking place all over the world. In this, those who studied in Delhi IIT and other IITs of the country are at the forefront. The benefits of IITs go beyond science and technology. IIT students are excelling in all fields like education, industry, society, journalism, literature and politics.

IIT Delhi is very concerned about social welfare. The IIT conducted various researches to control the spread of the virus in the early stages of the Corona pandemic. Developed test kits, protective suits, face shields, low-cost ventilators. In that way IIT Delhi has played a major role in the fight against Corona virus.

We are going to celebrate 100th Independence Day in 2047. Then the 4th industrial revolution would have brought huge changes. Artificial intelligence, automated technology has completely changed the way people live. Therefore, it is necessary to prepare educational institutions now for the future. I hope Indian IITs will face the future challenges very easily. Climate change has emerged as the world’s greatest challenge. To solve this, we need to develop technologies that protect the environment.

India is a developing country with a very large population. Our fuel needs are high. Various challenges may arise when switching from fuels like petrol and diesel to renewable energy. However, I am confident that Indian engineers and scientists will provide technological solutions to environmental challenges. Thus he spoke.