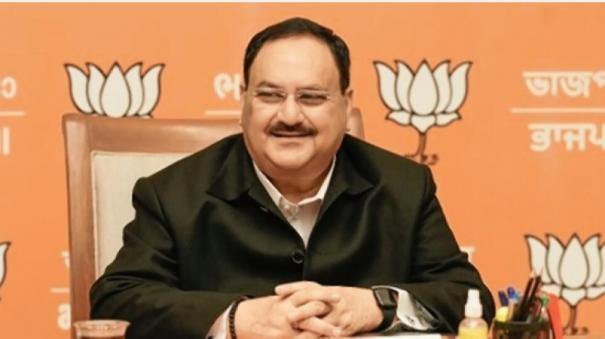 New Delhi: JP Natta has been appointed as BJP National President till June 2024.

This is attributed to the BJP’s return to power in Uttar Pradesh, Uttarakhand, Goa and Manipur, its 7th term in Gujarat and 73 by-election wins. It is also said that he was responsible for getting more seats in Bihar, Maharashtra and West Bengal which increased the importance of BJP.

Announcing Natta’s extension, Amit Shah said, “BJP will win the 2024 elections with greater strength than the 2019 elections under the leadership of Prime Minister Modi and JP Natta.” Natta has worked well during his tenure from the party to the elections. Our strength has been increased in 1.30 lakh polling booths across the country,” he said.

The 3-year tenure of Natta, who was elected as the national president in 2020, ends on January 20. Despite its victory in Gujarat, BJP lost power in Natta’s home state of Himachal Pradesh. In this situation, the BJP feels that choosing a new person as the national leader will cause a loss to the party. Because the 9 assembly elections to be held this year are considered as the semi-finals of the upcoming 2024 Lok Sabha elections.

In these 9 elections, the winning formula of Gujarat elections will be implemented. And in these 9 states where there is no BJP rule, Telangana and Rajasthan are also expected to win seriously. BJP lost 2022 elections in all assembly constituencies of Ghazipur in UP. So Natta is starting the campaign for the Lok Sabha elections in the name of ‘Mission 2024’ from Ghazipur. The BJP, which is fielding Modi as its prime ministerial candidate for a third term, is expected to try to capitalize on the completion of the Ram temple and the G-20 summit.

7th term in Gujarat, victory in 73 by-elections is the reason.