Embarrassing punishment .. Watch how the Russian ambassador in Poland was pelted with red paint 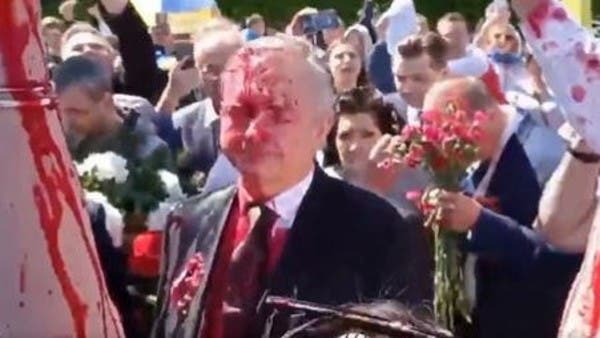 Unidentified assailants attacked the Russian ambassador to Poland, today, Monday, and a video clip spread on social media showed the moment of the attack while the ambassador laid flowers at the tomb of Soviet soldiers in the capital, Warsaw.

The clip showed the Russian ambassador, Sergey Andreev, standing next to the tomb of the soldiers, as unidentified people threw red paint at it, according to what was reported by the Russian “Sputnik” agency.

Despite the attack, the Russian ambassador continued to stand in front of the shrine, as the Polish police did not provide the necessary protection for the Russian diplomatic delegation in the region, according to Moscow.

In addition, following the attack, the Polish police opened a safe corridor for him to get out of the area.

In turn, Russia accused the Polish authorities of complicity with the protesters in the attack on its ambassador.

“The attack on the Russian ambassador in Warsaw once again reveals the bloody face of the neo-Nazis,” said Russian Foreign Ministry spokeswoman Maria Zakharova.

“In Warsaw, while laying a wreath at the tomb of Soviet soldiers, the Russian ambassador and the Russian diplomats accompanying him were attacked,” she wrote on her Telegram channel.

She concluded: “The demolition of monuments to the heroes of World War II, the desecration of graves, and now the disruption of the flower-laying ceremony on the holy day of every respected person proves what is already clear, as the path of the reincarnation of fascism in the West has been set.”

It is noteworthy that last March, Poland expelled 45 Russian diplomats, deeming them persona non grata and asking them to leave its territory, which led Moscow to take a similar measure on the principle of reciprocity.