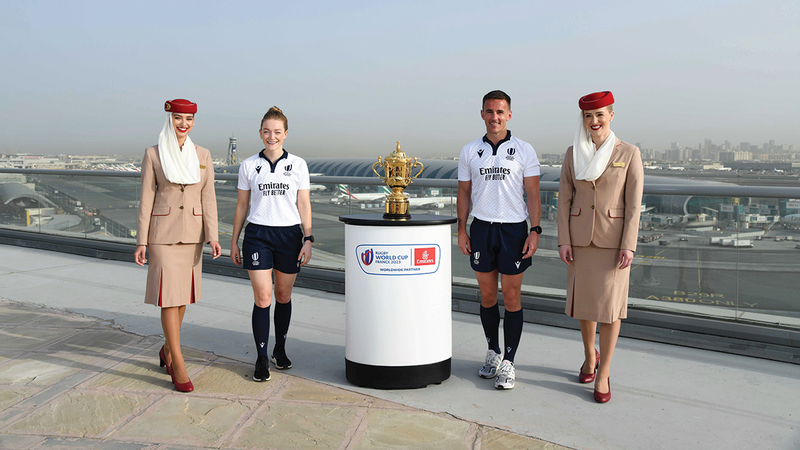 Under the agreement, the airline will continue to play the role of international partner for both the 2023 Rugby World Cup in France, and the next round of the same tournament, scheduled to be held in Australia in 2027.

A press release stated: “Emirates Airlines also announced the extension of its official sponsorship of the Rugby World Cup until 2027, after this partnership relationship proved its pivotal role in supporting the development of official matches for elite clubs. Since 2013.”

With its partnership with the “Rugby World Cup 2023” in France, Emirates Airlines will continue its successful partnership relationship with the International Rugby Federation, which was launched in 2007, where the airline has since become one of the most prominent and active supporters of the game as a partner in all the “Rugby World Cup” tournaments. » for men since 2007, and a partner in the Dubai and Cape Town tournaments of the HSBC Rugby Sevens series.

“With the support of (Emirates Airlines), the Rugby World Organization will be able to continue developing and supporting the referees of the game’s matches around the world, who play a central role in instilling the values ​​of respect and discipline in the game,” the press release said.

Rugby World President Sir Bill Beaumont said: “We are pleased to announce the extension of our long-term and successful collaboration with Emirates Airlines to include the next two editions of the Men’s Rugby World Cup, and in support of our Men’s and Women’s Referee Programs.”

He added: “Emirates’ wide international flight network and the airline’s passion to support rugby are key factors in the success of our efforts to make rugby a truly global game. Emirates’ excellence in providing a unique travel experience supports our efforts to raise our services to our audiences to higher levels.” .

In turn, Head of Revenue and Audience Engagement at Rugby World Organization, Richard Hezelgrave, said: “Emirates is a world-class airline, which makes it a high-profile partner, and it also enjoys an astonishingly high profile in any tournament it sponsors. Regarding the Rugby World Cup, we have partnered with Emirates Airlines for more than a decade, and we feel very proud to partner with them again during the next two editions of the Men’s World Championship.”