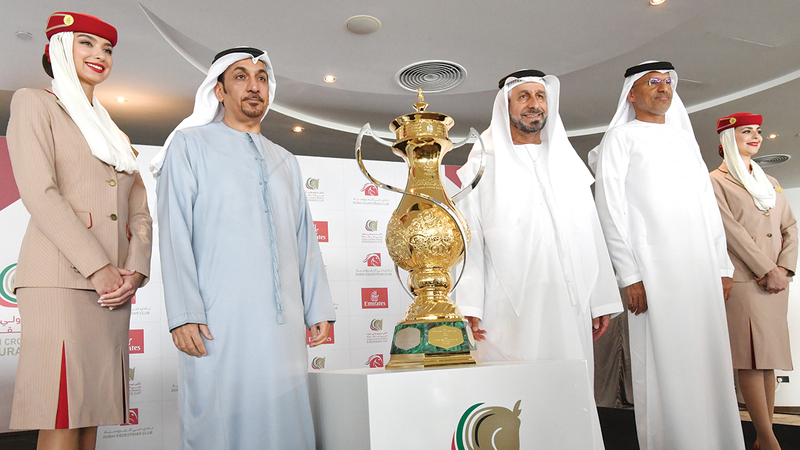 The Dubai Equestrian Club announced the details of the 15th edition of the Dubai Crown Prince’s Endurance Cup, which will be held tomorrow at 7 am in the Dubai International Endurance City in Seih Al Salam, sponsored by Emirates Airlines, at the end of the festival, which witnessed the holding of three races: the women’s race, the private stables and the Yamama Cup. . The club stated in a press conference yesterday that Emirates Airlines will sponsor the main race, which extends for a distance of 119 km, which will be divided into four stages, 40 km for the first stage, 32 km for the second stage, 27 km for the third stage, and 20 km for the fourth stage. The Organizing Committee announced valuable prizes amounting to 1.7 million dirhams, which will include the winners from the first place to the 30th place, as the first-place winner will receive 200 thousand dirhams in addition to the golden cup, and a prize of 180 thousand dirhams for the second place, in addition to the silver cup, and the third place 160. One thousand dirhams and a bronze cup, while the fourth-place winner will get 100,000 dirhams, and the fifth will get 90,000 dirhams. And the title of the last edition was won by Salem Hamad Malhouf, riding the horse “Willie Mir Anchor” for “M7 Stables”.

A member of the Board of Directors and Director of the Dubai Equestrian Club, Major General Dr. Muhammad Issa Al-Azab, said: “The Dubai Crown Prince Endurance Festival is one of the most prominent events on the agenda of endurance races this season.” He continued, “We extend our sincere thanks and appreciation to (Emirates Airlines) for its support and sponsorship of the Cup, and we wish all competitors success.” He said, “The festival witnesses the participation of more than 500 male and female riders in all its races.” For his part, Adel Al-Ghaith, Senior Vice President of Emirates Airlines, Commercial Operations for the Gulf, Middle East and Central Asia region, expressed his happiness at the giant carrier’s continued sponsorship of the Cup, and said: “Our sponsorship of this race is an affirmation of our commitment to this wonderful sport.”