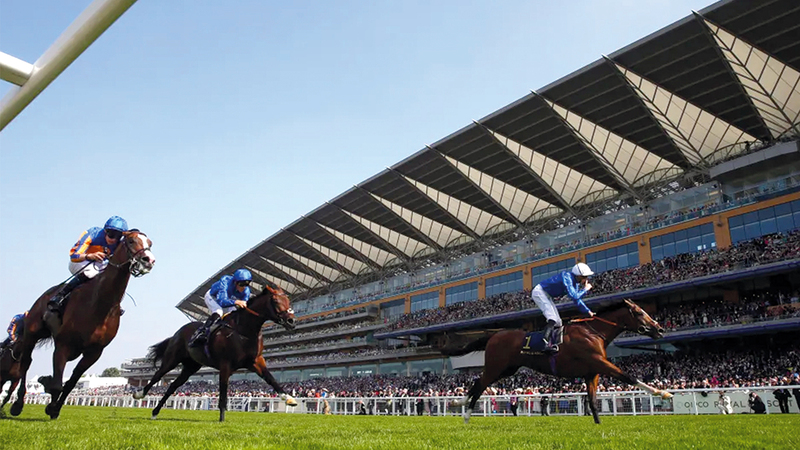 Today, global horse racing enthusiasts turn their attention to the ancient Ascot Racecourse in England, where the Royal Ascot Festival, the jewel of British horse racing, kicks off in a forum of 35 of the strongest races, with the elite grass-track horses competing for their titles on the international stage.

The opening day of the festival includes seven rounds, three of which are dedicated to “Group 1” horses, the highest rated on the world stage, in addition to being part of the British Champions Racing season series, offset by one run for “Group 2” horses, another for the “Listed” category, and two in the “Listed” category. parity.”

In its 311th edition, the festival has a strong participation of Emirates horses, spread over the five days, starting from the first day, which records the presence of 16 horses for Emirati owners.

The first half of the “Queen Ann Stakes” dedicated to the “Group 1” horses begins for a distance of 1,600 meters, at 5:30 pm UAE time, and seven of the strongest mile horses are competing for the title, led by the highest-ranked horse “Real World” with the “Godolphin” logo, and the supervision of the coach. The world’s Saeed bin Suroor, in light of the five-year-old horse’s quest to grab his seventh victory in the world of racing, including his victory in last year’s festival in Ascot with the title of “Royal Hunt Cup”.

The excitement continues on the first day, towards the third set of the “Kings Stand Stakes” for the “Group 1” horses for a distance of 1000 metres, and 18 elite speed horses are competing for the title, including the representatives of the blue logo “Godolphin”, the two horses “Man of Promise” and “Lazuli” “, who are supervised by Charlie Appleby, who aspire to their first title in the world’s top-ranked first category races, but their task collides with the presence of two of the best speed horses in the world, and they have previously won in Group 1 races, they are “Golden Ball” with the logo “Tabor”. Magnier and Smith, who won the famous Breeders Cup Turf Sprint, and Australian racing star Nature Stripe, who has impressive victories, most notably last November, won the Darley Sprint Stakes by three and a half lengths ahead of his closest competitor.

The Emirates owners are pushing three of their representatives to compete for the title of the fourth round “St. James Palace Stakes” for the “Group 1” horses over a distance of 1,600 metres, led by Godolphin star “Curibas”, under the supervision of coach Charlie Appleby, who was crowned at the end of last April with the title of “2000 British Guineas”. Emirati hopes for each of the undefeated pony “Melted”, with the slogan of His Highness Sheikh Ahmed bin Rashid Al Maktoum, and the supervision of coach William Haggas, who aspires to his fourth consecutive victory in the world of racing, in addition to the pony “Mighty Ulysses”, owned by Saeed Suhail, under the supervision of coaches John and Teddy Gosden, who this season won the British track races over the same mile.

Three horses bear Emirati hopes in competing for the longest distance in the festival, when they face the challenge of 4000 meters in the fifth round, “Ascot Stakes” for “Handicap” horses, two of them with the logo of His Highness Sheikh Hamdan bin Mohammed bin Rashid Al Maktoum, and the supervision of coaches Charlie and Mark Johnston, they are “Golden Flame” and “Triple Art”, while “Godolphin” is counting on “Marchel Blanc”, under the supervision of coaches John and Teddy Gosden.

The curtain falls on the first day of the seventh game of the “Copper Horse Stakes” for the “Handicap” class horses for a distance of 2,800 metres, with only the participation of the country’s representatives, with “Bandinelli” with the “Godolphin” logo, and the supervision of coach Charlie Appleby.

• The opening day includes 7 runs, 3 of which are dedicated to the “Group 1” horses, the highest in the world.

• The seventh race of the “Cooper Horse Stakes” festival for the “Handicap” class horses will be held for a distance of 2800 metres.

Godolphin coach Saeed bin Suroor expressed his satisfaction with the level shown by the horse “Real World” in his last training, before taking on the challenge in the “Queen Ana Stakes” in the opening half of the prestigious Royal Ascot Festival. Bin Suroor said in a press statement: “His training has gone well since his last participation, and I feel satisfied with the level he showed in training.”

He explained: “(Real World) has regained its level since its arrival last month and runner-up in the (Looking Stakes) race in Newbury, behind the horse (far), so that the dialogue is renewed again between the two horses, but the 1600 meters distance, and the ascending path to the finish line, suits him well.” .

It is noteworthy that Real World previously won the Royal Ascot Festival last year, after winning the Royal Hunt race, before bringing the curtain down on a successful European season, by winning last October in the Bree Daniel Wildenstein race for “Group 2” horses. “, which took place on the French Longsham track, and was followed in the winter season by the Meydan track in Dubai, by winning the “Zabeel Mile” race for “Group 2” horses.

The horse “Juan Alcano” with the slogan of Sheikh Mohammed bin Obaid Al Maktoum, under the supervision of coach Roger Varian, defends his title last year in the “Wolverton Stakes” dedicated to the “Listed” class horses, when he faces the challenge in the sixth race that runs for a distance of 2000 metres.

From Juan Alcano’s victory last season with the Wolverton Stakes at Ascot. From the source